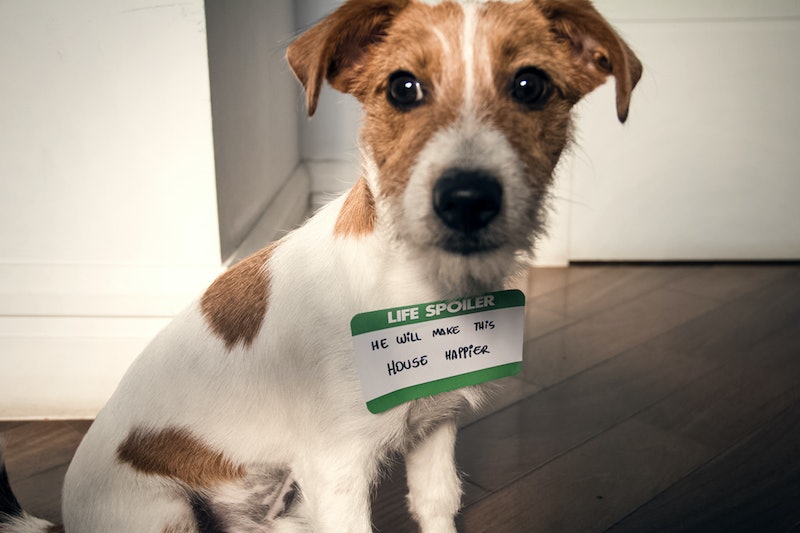 We've all encountered spoiler warnings plastered all over the Internet the day after pop culture events like, say, the Game of Thrones season finale — but what if we could have spoiler warnings for life? That's what the Tumblr art project Life Spoiler Sticker imagines… but they're not warning us off from anything or telling us to stay away for fear of ruining the surprise. Instead, Life Spoiler Stickers offer words of wisdom — a sneak peek into the future from people who have already been there — and sometimes a little advice is exactly what we need.

Life Spoiler Sticker is the creation of three friends, Rafael Ochoa, Alan Chung, and Caio Andrade. Together with Linn Livijn Wexell, Ochoa and Andrade also create thought-provoking works of art on the web and in the world at Caiolinnrafa.com — projects meant to inspire us to reflect about life and how we live it. #SocialPlanes, for example, urged us to connect not by poking people on Facebook or via tweets, but by flying social media logo-branded paper airplanes in their direction with messages scrawled on the inside. The tagline for the project was, “Because we don't always need a phone.”

Ochoa and Andrade teamed up with Alan Chung on their latest project, which does pretty much exactly what its title suggests: It offers “spoilers” for life in the form of stickers resembling the classic “Hello, My Name Is” name tags we've all become so familiar with over the years. These stickers might be found stuck to a person or an object, but no matter where they are, they're all worth reading.

Where did the inspiration for the project come from? “The world is moving at a speed that we can't follow. We are constantly trying to be updated about everything, the new technologies the new trends… We are always willing to know what comes next, what is waiting for us,” Andrade told Bustle via email. “From that, we thought it would be a nice approach to people to share their experience, their thoughts in a unique way — so why not do a Spoiler Sticker?”

This isn't the first time the group has employed stickers to make a point. Another previous project called #NotOnAppStore reminded us that there isn't an app for everything; it plastered real-life experiences with stickers emblazoned with the words, “Not available on the App Store” — a play on the familiar iTunes message those of us with smartphones have become so accustomed to over time.

Life Spoiler Sticker is a little more open-ended than #NotOnAppStore, purely by nature of where the spoilers come from. “Most of the spoilers on the Tumblr are from people that we handed out the sticker to,” Andrade explained. “The idea is to get people to think and come up with the stories. I believe the spoilers come from observing the world around us. If everyone stops for a second and thinks, they will have amazing advice to share.” Got a spoiler of your own? Send it to the team via email — or download the sticker template and make one yourself.

As for Andrade's personal favorite spoiler? Here — I used the template to make it into a sticker of its own: