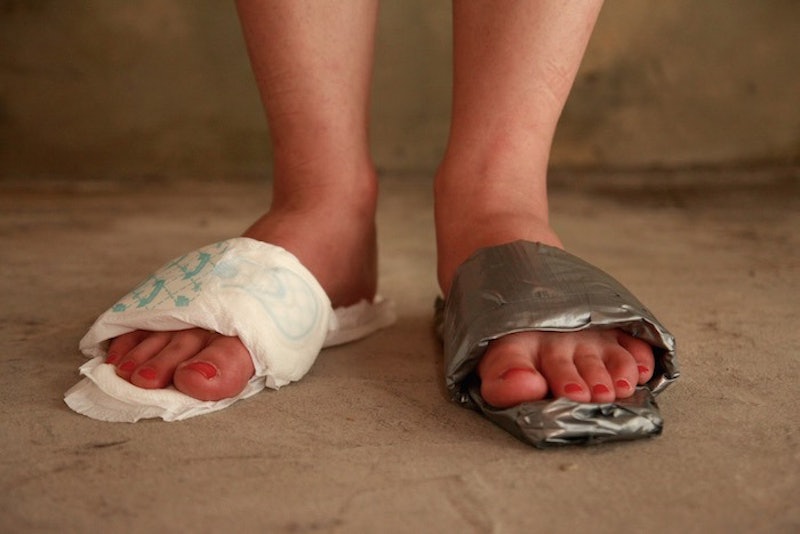 When we first meet Orange Is the New Black’s Piper Chapman, she’s a fish out of water. If we didn’t already know Piper was a prison novice, her maxi pad shower shoes, held together with a single hair tie, make it painfully obvious. Taystee, a more seasoned prisoner, immediately lets the audience know that real flip-flops are available in the Litchfield Penitentiary commissary, but Piper is so fresh, her money hasn’t arrived yet. Necessity is the mother of invention and thus her toiletry shoes were born. So, I decided to take a page out of her book and make some Orange Is the New Black maxi pad shower shoes for myself.

But, when Piper’s money still hasn’t come in a few episodes later, we learn her shoes aren’t the only “couture” shower footwear in the jail. The commissary doesn’t carry a size 13, so Sophia has fashioned her own shower sandals from duct tape. Piper’s soggy pads are pitiful next to Sofia’s silver slippers, which even feature arch support! And, somehow, Sophia is pulling them off (but what can’t Laverne Cox pull off?). Sophia also fabulously points out that, “Metallics are very in this season.” Totally on point.

OK, I made two shoes using nothing but maxi pads, a roll of duct tape, and, of course, a single hair tie. To add to the level of authenticity, I conducted the experiment in my basement, which has a terrifying shower from the original owner’s coal miner days. What can I say? I was committed to the bit.

For Piper’s shoes, it was pretty simple: two maxi pads stuck together, adhesive strip side to adhesive strip side, with a maxi pad band. For Sophia’s shoes, I tried to do her arch support and craftsmanship justice. I started like Piper’s with a maxi pad base, but this time I added a third pad to the inside soul in order to create a wider, cozier shoe with an arch. I then wrapped the pad twice in duct tape and used the tape to shape/widen the shoe.

Step 3: Taking Them For A Spin

Before hopping in the shower, I tried on the shoes and got my bearings. The pads felt like they could give at any minute.

I took off the shoes after a dry run and inspected them. The duct tape shoe was already molding to my foot and honestly just felt like a regular Adidas sandal. My money was on silver.

Water rolled off the resistant duct tape, and the maxi pads — surprise, surprise — absorbed ALL of the water.

Guys, there is nothing that can accurately describe the sensation of a heavy, saturated, bloated maxi pad on your foot. Other than, I had a serious case of diaper foot. I cannot emphasize this enough: Maxi pad shoes IRL are largely ineffective and useless after one wear. But, what did I really think was going to happen with super-absorbent pads?

If you’re in a dorm, summer camp, or women’s prison shower situation, leave the maxi pads for their intended use and give duct tape shoes a try. They are actually brilliant, super effective, comfortable, and will hold up after more than one wash. Snaps to Sophia for her smart invention!