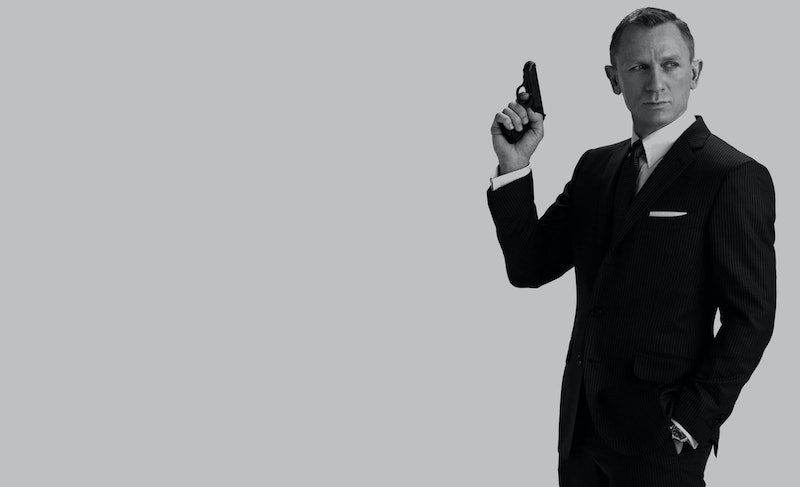 EARLIER: When I think of James Bond, I think about martinis that are shaken and not stirred, dastardly villains, and secret agents who can kick major ass while wearing gorgeous tuxes. I don't think singing and dancing have ever come to mind with 007, but that might all be changing come 2017. James Bond: The Musical is heading to Broadway, and possibly Vegas, with Placeholder Productions. The book will be written by Dave Clarke, with music and lyrics by Jay Henry Weis, a classical country composer. According to Playbill, the musical will be a brand-new Bond tale, and will have its own original Bond Girl, whom I can only hope will serve as more than a love interest to the story.

A James Bond musical might seem a little far-fetched, as the action genre isn't often paired with Bob Fosse choreography or Andrew Lloyd Weber ballads. At least both genres really love kicking. It feels like a bit of a square peg in a round hole situation, but if anyone can pull it off, it's musical theater people. Just think of your friends in college who could turn a small, cramped blackbox theater into a sexy Cabaret or Dr. Frankenfurter's lab. Ingenuity, people!

Here's how James Bond: The Musical could actually work, and bring a whole new audience to the stage.

1. Leave Julie Taymor Out of It

And just keep everyone on the ground.

2. Make Sure Pierce Brosnan Has Speaking Parts Only

Bond was your thing. Singing? Not so much.

3. Broadway Stages Are Actually Built For this Stuff, So Use 'Em

Just think of all the trap doors!

4. Give the Bond Girl A Multi-Dimensional Story

When you can't speak, you sing, and when you can't sing, you dance! But how can you have that much to express if your character isn't fully realized? James Bond: The Musical may finally give us more on the actual women in the Bond stories.

5. Take Us To Faraway Places

No one wants to pay $150 to see a show that takes place in an abandoned warehouse. Thankfully, with the power of theater, revolving sets and fantastical backdrops can transport us beautifully.

There can sometimes be a tendency to lose the drama to the music. James Bond shouldn't be a heel-clicking family romp. It should be full of danger, seduction, and secrets. That's got to be at the forefront.

7. Give The People What They Want

'Splosions. I mean, why else do people watch James Bond movies?

OK, so all of this might be a little difficult to realize on stage, but I'm confident that anyone who would be daring enough to bring James Bond to Broadway can pull it off. The fact that it's a Bond show should be reason enough for audiences to at least check it out.