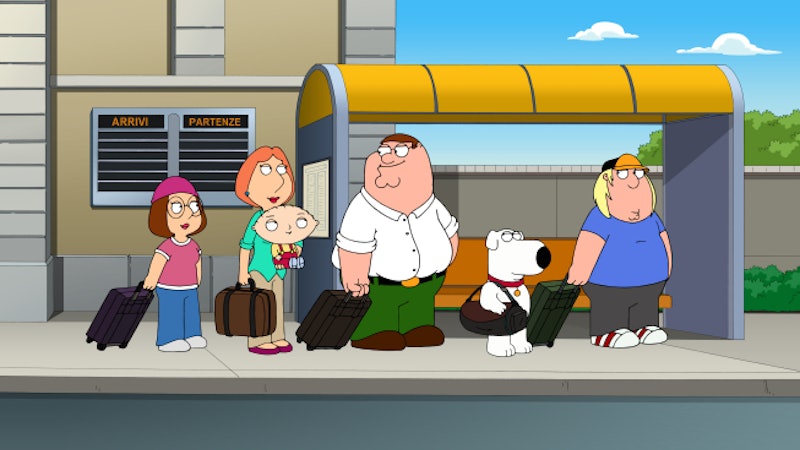 While you were busy watching Taylor Swift pretending to be surprised about her American Music Award wins, something really surprising happened on Family Guy. The FOX animated series — which has boasted as little change as [insert patented Seth MacFarlane pop culture callback here] — decided to make a big change on Sunday night. Family Guy decided to kill off Brian, the Griffin family dog who has been voiced by MacFarlane since the show's first season in 1999.

As you can imagine, this is quite monumental for Family Guy fans. Not because they couldn't keep their paws off Stewie Griffin's better half since the show's 1999 premiere, but because they now have to adjust to a new character. After Brian got fatally hit by a car in Sunday's episode, he was replaced by a new dog: A Sopranos-esque pup named Vinny. Family Guy's justification for killing off Brian? "We thought it could be a fun way to shake things up," the series' executive producer, Steve Callaghan, told E! Online. "By losing Brian, it felt like a void needed to be filled both comically, and also for the interpersonal relationships between all the characters ... [MacFarlane] is a big fan of The Sopranos and always loved Tony Sirico in particular and he thought it would be fun to write a character based around his voice and his personality and just who he is as an actor." (UPDATE: FOX has released a tribute video dedicated to Brian — watch it at the bottom of this post.)

That said, the Twitterverse isn't having as much fun with Brian's death. After Sunday's episode aired, comments poured in on the social media site mourning the loss of the alcohol-swigging crooner who only loved his own poop more than the Griffins. In fact, it seems many are vowing to quit watching the show whatsoever. For once, it seems Family Guy's dedicated fans aren't laughing: