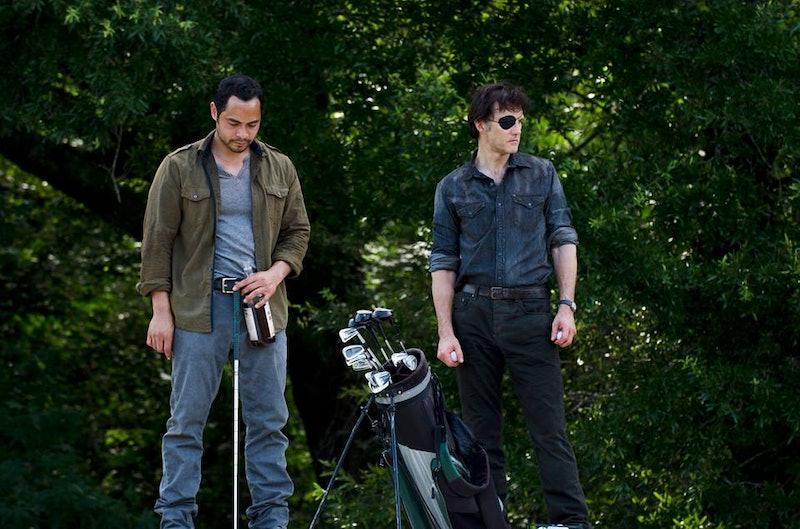 Once again, Sunday's episode of The Walking Dead strayed away from the prison to focus on The Governor’s whereabouts. The Governor found himself in a sticky situation when he happened upon a camp run by his ex-minion Martinez. Last week’s episode made a pretty good case for The Governor’s change of heart that came about when he took on his new alias, “Brian.” Unfortunately, this week’s episode proved that “Brian” is no different from Phillip.At the opening of the episode, The Governor is teaching Meghan to play chess. Along with Lilly and Tara, they are now living in a camper in Martinez’s new camp. At this point, The Governor still appeared to be a changed man. He would not talk about his past or about his experiences at Woodbury. His new family has given him motivation to continue to survive. Throughout the episode, The Governor had a mantra of “surviving” which he used to explain his harsh actions. Last week he burned the picture of his “real” family, possibly symbolizing that he has found a new one. His drive to survive is rooted in his passion to keep his new family alive and he will stop at nothing to protect them.The Governor was experiencing a role reversal living under Martinez’s orders. Martinez admitted that he wouldn’t have let The Governor into the camp alone — he only took him in because he had his new family with him. Surprisingly, Martinez gave The Governor the benefit of the doubt and believed that he was a changed man. Martinez even awkwardly played along with the whole “Brian” name-switching business. For a minute it seemed like The Governor was okay with taking a back seat role in the camp, but that all changed when Martinez and The Governor started drinking and playing golf on top of the camper.

Martinez admitted that his camp wasn’t necessarily safe and that was the breaking point. The Governor clubbed Martinez in the head and kicked him off the camper. As if that wasn’t bad enough, he then dropped Martinez in a pit of zombies. Yikes. And The Governor didn't stop there! He also killed off Martinez’s right hand man, Pete.So, The Governor looks like he is back to being “Governor.” So much for a change of heart. He's back to barking orders, the camp perimeter is being secured, and ammunition is being amassed. It’s time to batten down the hatches… and create Woodbury 2? With the whole shift back to being a dictator, The Governor also remembered his animosity for the prison. In the closing scene, he's hiding in the bushes outside of the prison with his gun aimed to fire. Looks like we’re in for a war.

Tonight’s lesson: No Shenanigans at the Camp

Meghan was playing tag with her aunt and others at the camp. While she was running through the sheets hanging to dry, she was attacked by a zombie. She tried to get away from it by crawling under a camper, but that didn’t really help. Tara tried to pull the zombie away from her — all she managed to do was pull off part of its leg. The Governor eventually heard Meghan’s scream and shot the zombie in the head. It was definitely a close call — looks like Meghan needs one of Carol’s self defense classes!