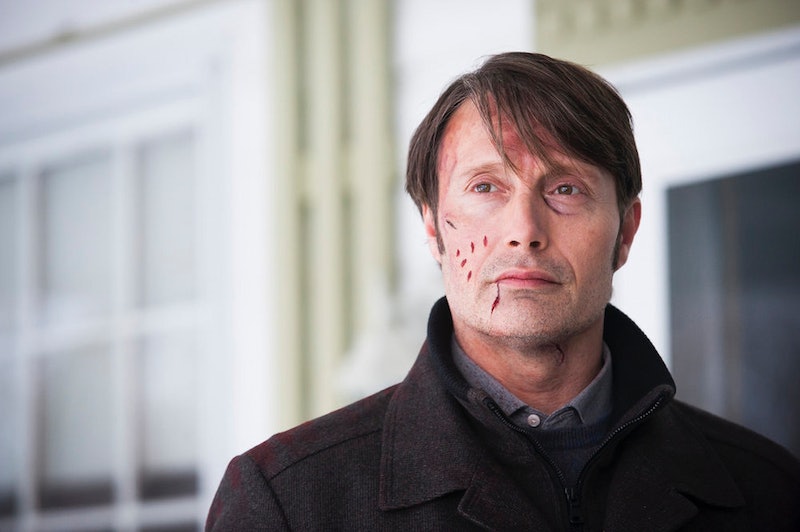 For Fannibals hoping for good news about the fate of their favorite show, the knife was twisted earlier this week with the announcement by showrunner Bryan Fuller that both Netflix and Amazon Prime had passed on picking up Hannibal for a fourth season. Audiences had been keeping a close eye on these two streaming services, hoping that they were the show's best chances for resurrection after NBC canceled it two weeks ago. So, with the online steaming option gone, how will Hannibal Season 3 end?

Though Bryan Fuller remains optimistic about his show's chances of survival, it might not be the end of the world if Hannibal ends for good after three seasons. When his show was originally canceled, he put the odds at 50/50, and after this most recent announcement, he stated that "we're still investigating possibilities." Like what? There are actually plenty of compelling options here: Showtime, which recently resurrected the cult-favorite Twin Peaks; FX, where the show would be a good fit with the ultra-violent based-on-a-movie Fargo; A&E, where Hannibal would blend seamlessly with the network's other horror prequels Bates Motel and Damien; or Sundance, which airs similarly acclaimed dramas Rectify and Top Of The Lake.

But, even if another network was interested in picking up the show, there are other stumbling blocks on Hannibal's road to resurrection. First and foremost, the cast's contracts expired at the beginning of this month. Stars Hugh Dancy and Mads Mikkelsen have openly stated their desire to see the show through to Bryan Fuller's conclusion... but when it comes down to it, neither of them are going to turn down a role that's offered to them merely on the off-chance that Hannibal *might* be picked up for Season 4.

They're not the only ones who are moving on, either. Fuller himself is in the midst of developing the adaptation of Neil Gaiman's American Gods for Starz. Due to his commitment as co-showrunner of that new series, he has stated that any hypothetical fourth season of Hannibal would have to be delayed for almost a year. In fact, this delay may have been what caused Amazon to balk from saving the show in the first place. No matter what HBO has done with Curb Your Enthusiasm or BBC with Sherlock, taking a year off between seasons is not normal practice, and it's understandable that Amazon would be nervous about the prospect.

Then there's the fact that Fuller still hasn't managed to secure the rights to Thomas Harris' The Silence Of The Lambs from MGM, who have owned the rights since they adapted the book into the 1991 Oscar-winning film. With Season 3 completing the Red Dragon saga, Lambs is on the horizon, and MGM is still refusing to budge. Fuller has stated that he had another story planned for Season 4, based on "a pocket in one of the novels of some really rich interesting character material that I’m inverting and twisting around" that would have "explored the Hannibal-Will Graham relationship in a much deeper fashion than the series ever has before." But, if the show continues, Lambs will have to be adapted eventually — and even if MGM did relent and optioned the rights to Fuller, remaking such a classic touchstone of Hollywood history is an iffy prospect at best.

I'm telling you all of this not to ruin your day (and apologies if I did), but rather to reinforce the idea that Hannibal ending on Season 3 may not be the worst thing in the world. Do I want more of Fuller's fantastically macabre show? Of course I do! I think it's one of the best things on TV right now. But, just think how lucky us Fannibals have been already. Many shows don't last nearly as long, even with bigger ratings. FOX canceled Firefly after one 14-episode season, even though it averaged 4.7 million viewers per episode — about three times the numbers Hannibal is pulling in this year.

39 gloriously gory episodes is certainly nothing to shake a stick at. And, the fact remains that Season 3 may prove to be a very fitting conclusion to Fuller's Hannibal saga. I think we can all agree that it would've been a travesty if the series had ended with last year's bloodbath of a cliffhanger; but this year will culminate with Fuller's adaptation of Red Dragon... which is actually Will Graham's swan song in the source material. He disappears from Harris's novels after that, save for a few scattered references, with Clarice Starling taking over as Dr. Lecter's foil for both The Silence Of The Lambs and Hannibal.

Fuller's vision of the story has been so devoted to the relationship between Graham and Lecter, that it's impossible to imagine the series leaving that behind. I'm sure Fuller could contrive reasons to keep Will around for his adaptation of Lambs, but the character would never again be as central to the narrative as he was in the first three seasons. Plus, with Hannibal behind bars, we'll never again get gorgeous sequences of him preparing elaborate dinners in his immaculate kitchen. Something about the show ending on the conclusion of the Red Dragon storyline, with Will and Hannibal working together one last time post-Hannibal's capture, feels fitting.

Of course, that being said, I'll be the first in line to devour any new episodes should Hannibal be renewed. And who knows? Just because the show might not get picked up this year doesn't mean it never will. Netflix revived Arrested Development after seven years off the air; Showtime is resurrecting Twin Peaks a full 25 years — a quarter of a century! — after ABC canceled it. Maybe one day the stars will align and the team will reunite to give us a look at Will and Hannibal's relationship a decade or so down the line. (This would at least give Fuller an out with the Lambs plot, which could merely be referenced as having happened at some point in the past.)

Or maybe the show will be saved tomorrow by the Food Network. Who knows?