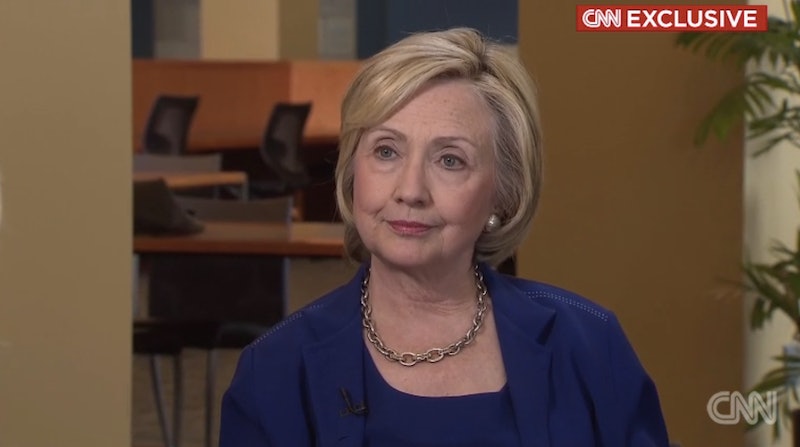 Hillary Clinton's first national interview since announcing her bid for the presidency aired Tuesday evening on CNN, and the tone for the remainder of her presidential campaign appears to have been cemented. Clinton sat down with CNN senior political correspondent Brianna Keilar in Iowa City, Iowa, to discuss the various issues that have emerged as important to the American public as the presidential election season has officially taken off. Central to the conversation between Clinton and Keilar was that of trust, and whether or not Clinton is perceived as a trustworthy figure in whom voting Americans can place their confidence.

This topic really seemed to touch a nerve with Clinton, and she seemed very well-prepared to discuss her trustworthiness and the confidence she has in her capability to hold the presidential office. She saw it coming, and wasn't going to shy from this line of questioning. Confronting and dispelling distrust will be vital to her campaign's success.

Trust was a touch-point that was fleshed out largely in a conversation about the pseudo-scandal better known as "Email-gate," referring to the personal email account used by Clinton to send messages while she was Secretary of State. When asking about the 33,000 emails that Clinton had deleted from this account, Keilar led the questioning with a statement that this incident "had eroded some trust" between Clinton and the public. Clinton's response began with the unequivocal clarification that everything she did "was permitted" and she in no way violated any policies or law by using a personal account, or deleting messages. She seemed to want to swiftly invalidate any assumptions that her emailing practices were in some way illegal, or that she otherwise intended to subvert the law.

Clinton went on to explain that she was not in fact required to turn over any of her emails, and that turning over the 55,000 emails that she delivered to the State department was "above and beyond what was expected," given that, according to Clinton, each of the government emails she sent would already be logged in the State's system. Clinton apparently wanted to make it as clear as possible that she had acted in good faith and confidence that both the American public, and the State department, would not find anything amiss with her email account.

The problem, however, is that even with this knowledge and information coming from Clinton previously, there are enough people who have expressed a lack of trust and confidence in Clinton that the subject mostly dominated this interview. I do not doubt that some will forever take issue with these emails, regardless of how many explanations are given, and my supposition is that Clinton will have to address this again. Despite the legality and intentions of her actions vis-à-vis her email habits, she still has something to prove.

Frankly, it seems that Clinton and her campaign advisers had trust in mind from the very launch of the campaign. Her campaign began with asking the simple question, "Are you ready for Hillary?" This question was not asked lightly or flippantly, and answering with her campaign slogan "Ready for Hillary" indicates, perhaps, that her campaign is already very self-aware in regards to the fact that plenty of Americans are not yet ready. They may not be ready because she is a woman, or because of supposedly shady emailing, or, as was briefly addressed in this interview, may not be ready because she is a Clinton.

The issue of her very close association with a president who violated many American's sense of trust, her husband Bill Clinton, was addressed in her interview with Keilar, albeit very subtly. Clinton noted that "This [trust] has been a theme that has been used against me and my husband for many, many years. And at the end of the day, I think voters sort it all out." By addressing the association of her family with scandal, much in the same way that she directly addressed the problems that arose out of Email-gate, Clinton is making an attempt to prove to voters that while imperfect and embroiled in complicated politics, she will tell the truth. We see again this keen self-awareness about where she must prove her trustworthiness to voters, and her willingness to confront these issues instead of denying their existence.

In short, the tone has been set. As Keilar noted, there is polling to back-up the idea that Clinton has an uphill battle in front of her in regards to trust, and she will have to answer for that all the way through election night come November 2016. The questions surrounding trust that are nagging at the American public and coming full-force from the media will not be assuaged by one prime-time interview; there is still another year and a half of explaining left to do.

I predict that we can expect to see more on this particular message going forward. If we aren't ready for her, Hillary will aim to make us so. Watch out for the words "trust," "confidence," and "honest" as her campaign soldiers on. Right or wrong and no matter the reason, Clinton will have to continue to work very hard to win the confidence of those who are not quite ready to see her take the white house.