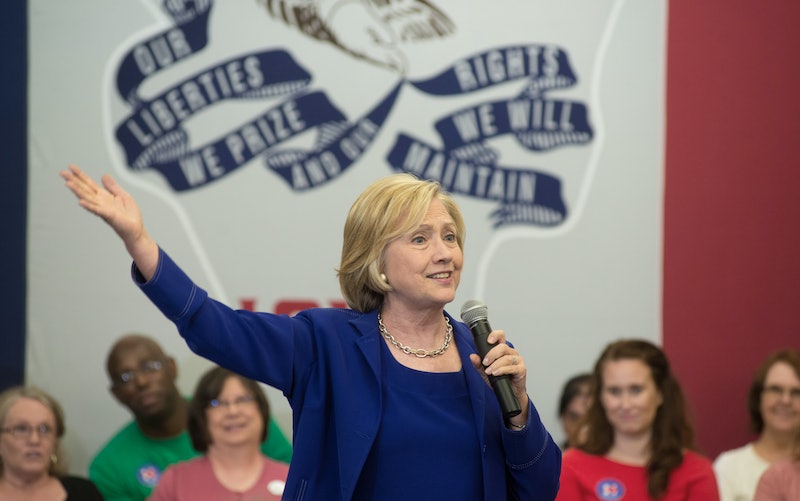 In the first of its kind since the start of her campaign, Hillary Clinton's CNN interview gave potential voters key insights into the upcoming presidential race — but how can you watch it? If you weren't able to tune in Tuesday to watch the interview live, no need to worry just yet. There are still plenty of ways to get your Clinton fix.

The interview, which took place during Clinton's trip to Iowa, saw CNN reporter Brianna Keilar hold her to several hard questions, including her opinions on Bernie Sanders, immigration, and whether the American people should trust her. Though Clinton sidestepped several of Keilar's probing queries, most notably on Sanders, she pushed back when asked about the email scandal that has resulted in the State Department releasing thousands of her personal emails. According to Clinton, her actions were permitted, and she's gone above and beyond in the aftermath of "Emailgate" to provide transparency.

I want people to understand what the truth is. And the truth is: everything I did was permitted, and I went above and beyond what anybody could have expected in making sure that if the State department didn’t capture something, I made a real effort to get it to them. And I had no obligation to do any of that.

If you missed the interview and you have cable but not a TV, you can go to CNN Stream (which you can access here) and plug in your (or a friend's) cable provider information. If you, like many millennials, don't have cable, your options are much more limited.

CNN has isolated several main clips of the interview and made them available to view at any time on their website. While these don't cover the full content of the interview, some of the most interesting moments are there, such as the questions about her trustworthiness, Emailgate, the GOP, immigration, and which woman should be on the new $10 bill. That last question yielded one of Clinton's more direct answers:

I don’t like the idea that as a compromise you would basically have two people on the same bill, and one would be a woman. That sounds pretty second class to me. I think a woman should have her own bill and it may be more appropriate to look at the $20 than the $10.

If those selected videos aren't enough to quench your thirst for Clinton, you can read CNN's full transcript here. Though there is no video to accompany it, Keilar's questions and Clinton's responses are laid out in full. For those looking to gain further insight and understanding into Clinton's policies and campaigns, the transcript might be the better option. And if that's not good enough for you, we all know the interview will likely end up on YouTube soon.