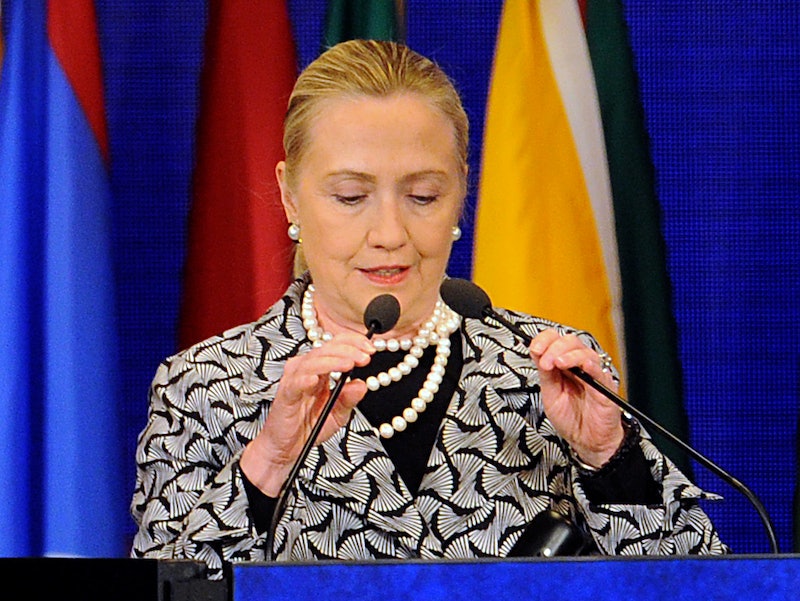 CNN Senior Political Correspondent Brianna Keilar brought up a lot of important issues when she interviewed Hillary Clinton for CNN's The Situation Room. The topics ranged from immigration to the Republican candidates to who should be on the new $10 bill. However, one of the most important things addressed was clearly Hillary Clinton's singing abilities.

Keilar asked Clinton who was a better Saturday Night Live parody of herself: Amy Poehler or Kate McKinnon. Although Clinton says Poehler is a friend of hers, the candidates would not say which comedian did a better job portraying her on the NBC variety show (which would not be the only question many viewers would accuse her of dodging). Instead, she said, "I'm the best Hillary Clinton."

McKinnon also plays Justin Bieber, making her probably the only thing Clinton has in common with the pop star. That fact caused Clinton to joke, "I wish I could sing."

Clinton does not have many public performances showcasing her singing voice. She's said that she sounds good to herself, but others close doors and go away. But that's all a huge lie. To decide for yourself whether or not Clinton has a good set of pipes, here are a few videos that showcase her abilities.

Clinton got the chance to sing the National Anthem with a full band in Iowa while campaigning for the 2008 Democratic presidential bid. She's kind of hard to hear, and I caught at least one voice crack. But her patriotism toward the song is authentic and gives the performance extra points.

Clinton told the story of lip-synching in a school production of Bye Bye Birdie. The bubbly talk show host then sang a duet with Clinton from the musical. Here, the now-presidential candidate admits again to not being able to sing. There isn't much singing going on with this dialogue-heavy song, but Clinton's natural charisma and endearing lack of confidence in her ability make it a winning performance.

Hillary Sings As A Doll

Although this isn't really Clinton, here she is singing in doll form. Actually, the lyrics are pretty sexist, but it's still kind of cute.

Hillary Sings At A Baseball Game

At a Cubs game, the first lady sang "Take Me Out To the Ball Game." The announcer and crowd drown her out at first, but once she gets the microphone, she shows her spirit!

Although this video doesn't have Clinton actually singing, it's still adorable to hear her talk about singing to Baby Chelsea. I wish she would have channeled Audrey Hepburn here for a moment and really belted.