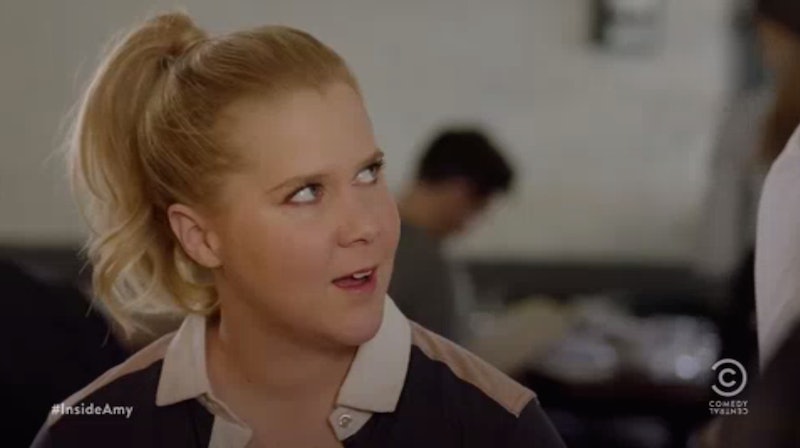 You know what's better than an accent on a man? Being a good person. The Inside Amy Schumer Season 3 finale gave us an incredibly on point sketch about women who go crazy when a man has an accent. They date or pursue them even if they are the worst people on the planet. Just because someone has an accent, that doesn't automatically make them smarter, funnier or sexier, and unfortunately some people don't totally get that. Thankfully Amy Schumer is here to show these people (women mostly) the error of their ways. In the sketch, Schumer overhears a rude Englishman telling a waitress that he doesn't want to tip her. Instead of being outraged for this women working what can be a thankless job, Schumer instead goes up to the Englishman, Cliven, and tells him she's in love with his accent. Right off the bat, it's obvious Cliven is a terrible human, asking Schumer for money to use the subway and only agreeing to go out for a drink if she's paying.

Soon they've been dating for two weeks already, and Schumer is still in awe over this terrible man's accent rather than hearing the horrid things he is saying to and around her. At one point, Cliven tells Schumer not to touch his fries because in his eyes she basically doesn't need the extra pounds. He even hits on a British waitress in front of her and her reaction is to ask if they know each other.

When Cliven finally breaks up with Schumer, she's still so enamored by the way the words are coming out that she doesn't realize what he's saying. Instead she responds by saying "I love you" and asking the British waitress for another drink for her boyfriend who has very clearly just ditched her in the bar. When the British waitress tells Schumer the next drink is her treat, Schumer replies "British people are so nice."

If there really are people who think this way, I genuinely hope you get a chance to watch this sketch. Don't judge a man by his accent ladies, try and make sure he's not a complete, obvious tool before you date him!

More like this
Amy Schumer Is Actually The Other Kardashian Sister You Never Knew About
By Jake Viswanath
Sandra Bullock, Girlboss Extraordinaire
By Matt Harkins & Viviana Olen
Spice Girls’ Net Worth: The Richest Member Is Wealthier Than The Rest Combined
By Hugh McIntyre
Pete Davidson & Kate McKinnon Are Part Of A Reported Major SNL Cast Shakeup
By Brad Witter
Get Even More From Bustle — Sign Up For The Newsletter