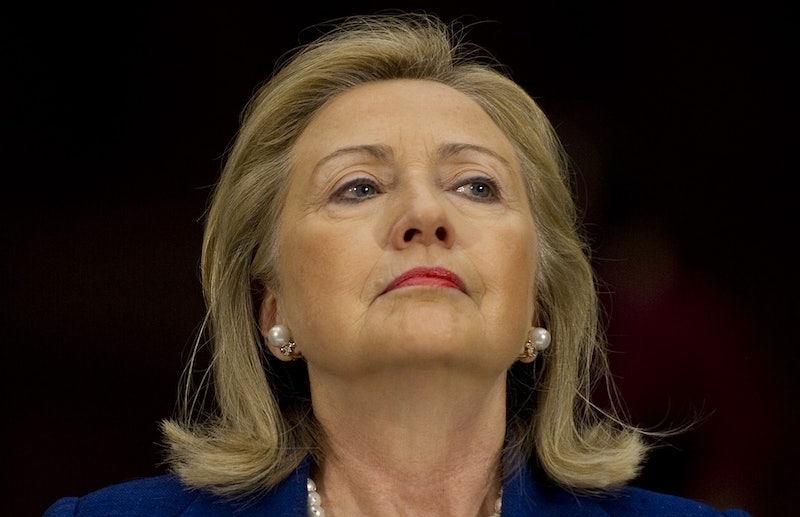 One of the more humanizing things about Hillary Clinton are her facial expressions — they always give away what she's thinking, and it often seems like the former New York senator is getting real tired of this political circus. If the former secretary of state found herself in a poker game, she would lose. During Tuesday's CNN interview with Brianna Keilar, Clinton was easygoing and affable as she skated her way around questions about Bernie Sanders and her economic plans, but her facial expressions told an entirely different story.

Clinton's expressions and mannerisms have found their way to GIF stardom for a reason: They're pure gold. Just like the rest of us, Clinton has a hard time hiding her annoyance, and her ability to throw shade without even opening her mouth is downright beautiful. While other politicians hide behind schmaltz and smile their way out of tough questions, Clinton's face makes it clear that she is a proud, independent woman who won't take any shit.

I propose that going forward, when faced with bullshit and questions we don't want to answer, we turn to Clinton for guidance. Let her facial expressions and refusal to acknowledge the things that annoy her guide us. Throughout her entire CNN interview, you could almost see her screaming internally and laughing to cover up her plot to bring down the patriarchy (and the GOP).

Don't believe that Clinton is the queen of shade? Just look at her facial expressions while being grilled by Keilar.

The "I Drove All The Way To Iowa For This?" Face

"I've been awake since 6 a.m., I've been on my feet all day, and I'm only here because Bernie Sanders is catching up to me. No, I don't want to talk about why people don't trust me."

"I've made my career by effectively dodging reporter's questions, and I'm not going to let that stop me now."

The "Sanders Who?" Face

The "Oh My God, Seriously, It Was One Time" Face

"If you say the word email one more time, I will actually set this quaint-looking library backdrop on fire."

The "Oh, Right, Trump And I Used To Be Friends" Face

"Look, we all have that one friend who is wacky and fun until they start yelling about Mexico and subtweeting you. It happens. But I've moved on and he's definitely out of my squad now. And he and his friends suck at immigration reform."

More like this
Michigan’s Governor Is “Going To Fight Like Hell” To Protect Abortion Access
By Andrea Zelinski
How To Fight For Reproductive Rights, Based On How Much Time You Have
By Courtney Young
The NuFace Trinity Facial Toning Device Convinced Me To Quit Botox
By Danielle Sinay
Chrishell Confirmed Her New Romance With An Aussie Musician At The 'Selling Sunset' Reunion
By Brad Witter
Get Even More From Bustle — Sign Up For The Newsletter