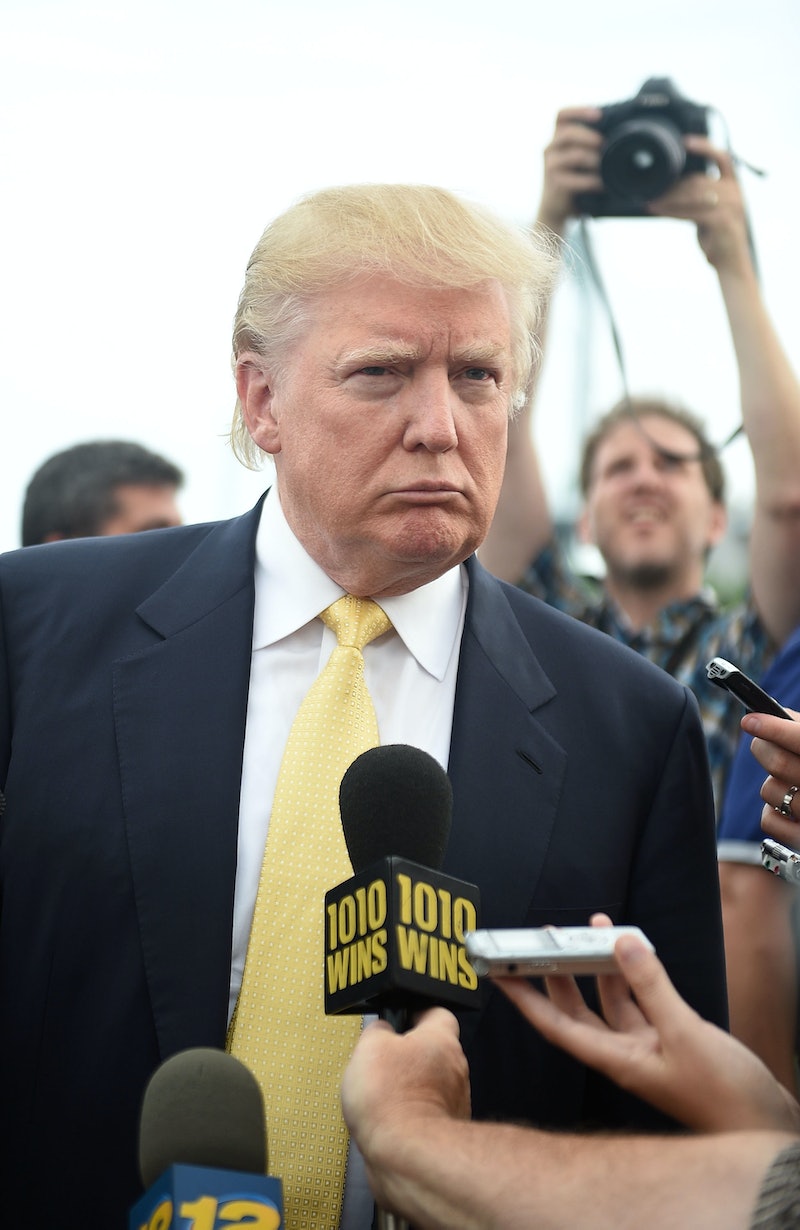 Sometimes there comes a comparison so horrible (and so hysterically accurate) that you can’t help but marvel: such are the similarities between Donald Trump and Joffrey Baratheon. Okay, hear me out. On a surface level it seems like a really mean comparison. Trump, with his foibles and blunders, most likely has never sexually assaulted prostitutes with a crossbow. Or ordered the beheadings of his enemies. We also can only pray that he’s not a result of an incestuous relationship or is manipulated by his mother as a way to take over the world. We’re sure that his mother was a very nice woman.

But when you look at Trump in the context of the 2016 election, the comparison starts to get a bit more accurate. He’s perfectly poised to be the villain of the campaign cycle, the guy that everybody loves to hate. And while Trump brings a likability that literally no one but Sansa would be deluded enough to think Joffrey possesses, these two do share a unique ability for throwing temper tantrums.

The finer points of the comparison were pointed out on Twitter, and we think that @OhNoSheTwitnt makes some pretty compelling arguments. To further prove the point, we’ve compiled a list of extra evidence proving that Trump is truly the Joffrey of the 2016 elections.

He Has No Political Experience

What, like it's hard to run a country? This is what he's been training for his whole life guys, so step aside and let the man rule. Clearly he'll be the best at it.

He Hates Foreigners And Poor People

I can't speak to Trump's opinion on all non-Americans, but his views on Mexican immigrants are pretty well recorded and verified. And when he announced his campaign for presidency, he made it quite clear that people who don't have billions in assets are "losers."

It's unclear whether the success of Trump's show The Apprentice was because people enjoyed hearing Trump's views on life, or if they liked to hate-watch. But one thing is clear: Trump's money opens doors and friendships. Celebrities such as Oprah Winfrey and presidential hopeful Hillary Clinton have once been considered Trump's "friends," which I think is just a codeword for people who hang out with you because you have money.

His Hair Is Atrocious

Trump and Joffrey's hair are actually shockingly similar when you compare them side by side. Blonde, slicked back, and horribly styled. Trump's up there in age, so he gets a (kind of) pass. But Joffrey clearly has good genes — so why didn't he inherit any of his family members' great hair?

He Inherited His Wealth

Trump definitely worked harder for his kingdom than Joffrey did, but he still had a hand getting there. Trump's father was also extremely wealthy, and some say that upon his father's death Trump inherited between $40 to $200 million. Imagine how many Iron Thrones that could buy.

He Gets A Little Carried Away Sometimes

When Trump doesn't get his way, he's known to throw temper tantrums. He's posted several angry Instagram messages calling out his political adversaries, and no one can forget the full-scale meltdown he had when Neil Young wouldn't let Trump use his song for campaigning.

He Is Inexplicably Surrounded By Gorgeous Women

They Have The Exact Same Pouting Look

Assumably, one of Trump's advisers told him that he looks pensive and authoritative when he puffs out his lips and stares at the camera. But in actuality he looks like he's doing hist best imitation of a petulant boy king.

I don't mean to insinuate that Trump is going to be poisoned at his wedding and die a gruesome and painful death. After all, he's lived through several of them already, so his rates of survival are pretty high. But November Is Coming and it's unlikely that Trump will stick around long in the Game Of Presidents (someone really needs to think up a good pun for this, STAT).

More like this
Yes, Billboard Queen Angelyne Really Ran For Governor Of California
By Brad Witter
How To Support Gun Control Reform Right Now
By Morgan Brinlee and Carolyn Steber
10 Times Diana & Meghan Spoke Similarly On The Royal Family
By Sophie McEvoy
The Church Of Scotland Votes To Allow Same-Sex Marriages
By Sam Ramsden
Get Even More From Bustle — Sign Up For The Newsletter