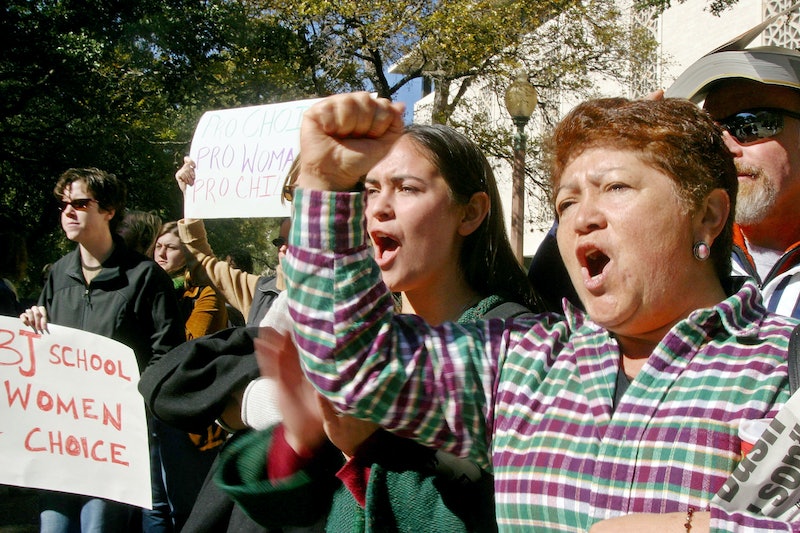 Texas Republicans passed a restrictive abortion bill early Wednesday morning that would effectively close 37 of the state's 42 abortion clinics and ban abortion after 20 weeks of pregnancy.

Whether that bill is legitimate, however, is still under review. The vote may or may not have occurred before the midnight deadline, reports the Associated Press (who initially reported the bill had passed, but later updated the story).

The vote came at the end of a dramatic Senate session, in which Sen. Wendy Davis spent nearly 11 hours attempting to filibuster the bill on behalf of state Democrats. Just as the clock turned midnight, senators voted 17-12 to pass the bill while more than 180,000 people watched online via the Texas Tribune's livestream.

Davis began her filibuster at 11:18 a.m. Tuesday morning and planned to speak until the special session expired at midnight, but she ran into a few snags along the way. She received three "points of order" or reprimands throughout her speech, with the last one effectively shutting down the filibuster two hours before the deadline.

Senate Democrats then tried to run out the clock by debating those "points of order" in addition to other issues.

In one particularly poignant moment, Sen. Leticia Van De Putte asked Lt. Gov. (and residing Senate President) David Dewhurst: "At what point must a female Senator raise her voice to be heard over her male colleagues?"

With about 15 minutes to go, the massive crowd of filibuster supporters inside the capital erupted into applause, cheers, and chants.

But it didn't stop the vote, which was nearly drowned out by the chaos in the chamber. Still, the bill's fate remains uncertain. There's a good chance the vote occurred after the 12 a.m. mark and since the session expired on June 26, it could be ruled unconstitutional.