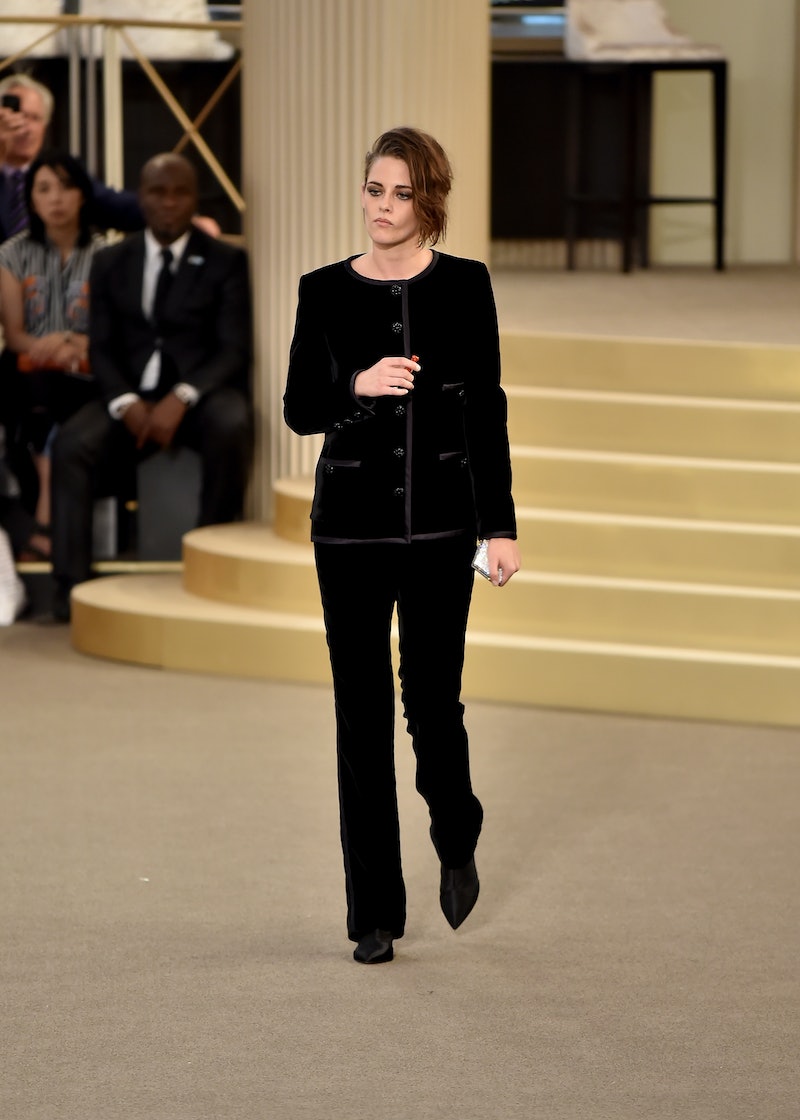 Rihanna isn't the only fashion rebel and rulebreaker of the twentysomething set. She's got some serious competition ready to usurp that throne. Kristen Stewart wore a black velvet pantsuit to a Chanel runway show in Paris. It was her totally her unique take the menswear trend. The actress' asymmetrical, burnt orange x brown locks only elevated her fresh spin on men's threads. It was her version of the Girl Boss.

K. Stew's suit was dark and heavy. It was also made of velvet, which is not exactly a fabric known for being breathable or light. Especially in the summer.

Not only was the Twilight superstar dressed in head-to-toe black, but she was not wearing a dress, a skirt, or shorts! Every inch of her, except her neck and extremities, was covered. And it was chic as hell when it could have been majorly dowdy.

That is how K. Stew earns rebel status.

Wearing all black in July is something non-all-black-wearers scratch their heads at. I can't tell you how many times people comment to me, "No wonder you're so hot! You are wearing all black!" I often respond, "I could be naked or dressed in all white and still be hot and sweaty.

On anyone else, this could have been matronly. But given the fit and her short-on-one-side, long-on-the-other hair and her strut, it skewed young and edgy.

If you think that's easy to do, well your closet must be comprised of basics and basics only. Let's get a closer look at Bella Swan's, er, Kristen Stewart's all-black attack.

How Girl Boss is this pose, with one hand behind her back at a casino table? Who else is crushing on her besides me?

She paired the suit with heels. From the back, we see how short K. Stew has gone with her hair. I can't even handle the confidence with which she is strutting.

I have to mention that Julianne Moore was also wearing an emerald dress in a heavy velvet fabric. It clung to every curve and looked gorge on her. But K. Stew was not the only one opting for a thick, unsummery material. What's up with all that velvet in July? It's confounding, but moving right along...

The cut of the pants elongated Stewart, known for her red carpet scowl. She appeared taller.

Here you can see the piping and button detailing.

Is this seat taken? K. Stew is a girl after my all-black-wearing heart. No grandma chic here.