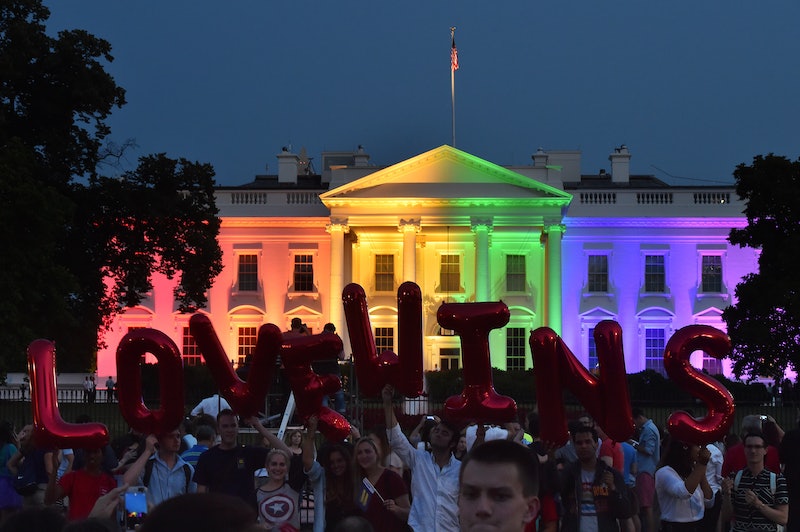 It's hard to believe that it was only 12 days ago that SCOTUS ruled gay marriage bans illegal, finally getting with the times and giving millions of same-sex couples around the country the right to officially declare their love in the eyes of the law. It was an amazing and monumental decision that not everyone agreed with, but which stands nonetheless, inspiring hope in many that America really can change and that yes, love finally wins. Never one to miss out on an opportunity to turn an incredible news story into cold hard cash, Hollywood has jumped on the equality train. According to The New York Times, 20th Century Fox will make a movie about SCOTUS' same-sex marriage ruling, and more particularly, about the case's plaintiff, Jim Obergefell, and his life-long fight to secure these rights.

Fox announced on Tuesday that it had secured Obergefell's life rights, as well as the life rights of his lawyer, Al Gerhardstein. The film company also managed to buy the screen rights for an as yet unpublished book by Mr. Obergefell and the journalist Debbie Cenziper, which is expected to find a publisher sometime this week. Fox 2000, which handles Fox's literary adaptations such as Life of Pi and The Devil Wears Prada, will oversee the project, with Wyck Godfrey and Marty Bowen slotted to direct.

"It’s a transcendent love story about someone who goes to such a length for love that he ends up changing the world," said Godfrey. The story to which he's referring is, of course, Obergefell's, as well as his longtime partner John Arthur's. The pair married in 2013, but when Arthur passed away, the state of Ohio refused to list Obergefell as his spouse on the death certificate, leading him to file the lawsuit which eventually led to SCOTUS' decision. It's certainly a story worth telling, and one that we need to hear, so I can see why Fox jumped on the opportunity.

While I completely support this incredible historic event being documented on film, my internal cynicism towards Hollywood and its ability to treat stories like this honestly and with great care does give me a slight bit of pause. Of course, I'm hopeful that Obergefell will be involved intimately with the process and that his feelings about seeing his life play out on the big screen will be taken into consideration. He is a true hero, one who has refused to bow down to the status quo and who we should all thank for being brave and strong and pushing against the opposition to make the world a better place for all of us. As long as that is honored in the final product, I can't wait to see it.

More like this
Sandra Bullock, Girlboss Extraordinaire
By Matt Harkins & Viviana Olen
Twitter Was Saying The Same Thing About Sam Ryder’s Surprising Eurovision Result
By El Hunt
Yomi Adegoke On The Offline Diaries & The Power Of Representation
By Jessica Morgan
The Music Industry Continues To Fail Black Women
By Precious Adesina
Get Even More From Bustle — Sign Up For The Newsletter