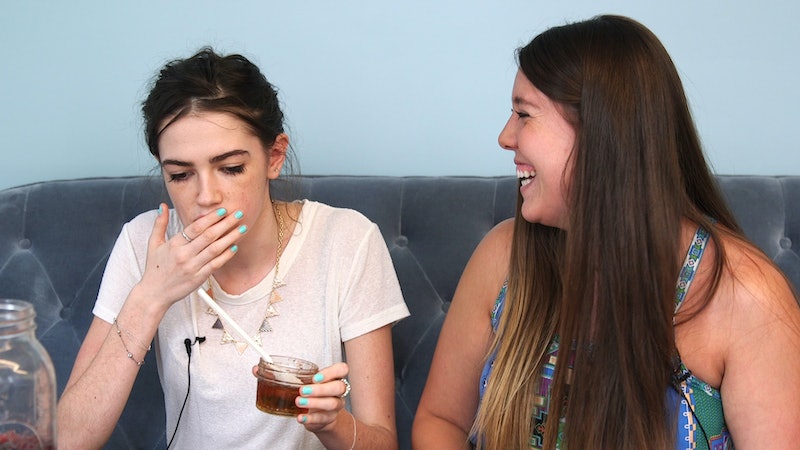 What does eating a whole bag of gummy bears in one sitting and pounding shots of vodka on a Saturday night have in common? A whole lot of regret — zing! But there's just something about combining the two that seems like a good idea — I'm talking about learning how to make alcoholic gummy bears, obviously. You don't have to be a giggling co-ed to appreciate the boozy effects you get from dousing a bag of Haribo in a vat of vodka, but just how many vodka gummy bears does it take to get a person drunk? It's a very important question, because eat too few, and you're going to feel slightly queazy, minus the buzz that makes it worth it. Eat too many, and well, you probably won't be feeling anything at all, because you'll be passed out on the floor. At Bustle, we decided this was a matter worth investigating.

First, we added a bag of gummy bears to a mason jar full of vodka. Then, we let the whole thing sit for 36 hours straight, to ensure maximum booziness. Finally, it was time to start our experiment. Equipped with just a spoon, our brave participants kept tally of how many gummy bears they had eaten until they felt good and tipsy, and then took a breathalyzer test to see just how effective the bears had been. Some tapped out after just a few, while others managed to choke down more than 30. Most agreed that the vodka gummy bears gave them more of a boozy sugar rush than an actual buzz, and all agreed that it's gonna be a while before they look at gummy bears the same way again.

Looking for more cool ideas? Check out Bustle on YouTube.