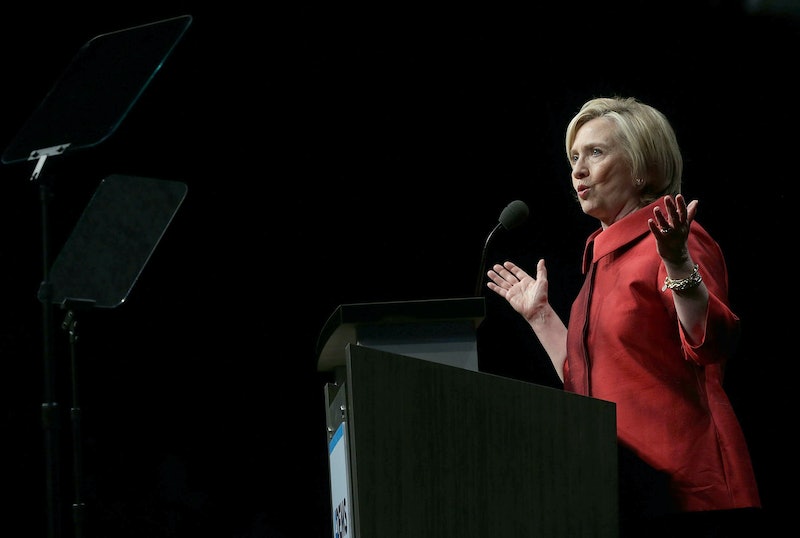 On Tuesday, hours before Hillary Clinton sat down for her first major interview since launching her presidential campaign, one man was already trying to call her out for supposedly being a hypocrite. Neoconservative pundit and filmmaker Dinesh D'Souza tweeted a fake photo of Clinton with a Confederate flag taken during her university days at Wellesley College. He posted the photo along with the caption "Look closely at this Hillary photo — isn't that a #ConfederateFlag behind her on the bookshelf?" in an apparent effort to discredit her recent denunciation of the controversial flag. However, as soon as he posted the pic, many tweeted in response letting D'Souza know that he had been duped by yet another Photoshopped pic of Hillary.

In the photo of young Hillary, which was taken by Life magazine in 1969, she is shown sitting in front of a bookshelf with her hands up in a shrug-like gesture. According to The Guardian, the then-student was talking about her support of student protests when the photo was taken. Anyone who knows how to Google could have easily confirmed that the real photo does not include the flag in the background. But D'Souza, who pleaded guilty to violating campaign finance laws last year, apparently is unfamiliar with the very easy confirming-by-Googling process, because he tweeted this with enthusiastic conviction:

Almost immediately, people more familiar with the world's most widely used search engine posted tweets refuting D'Souza's "discovery." Clearly, he had fallen for a Photoshopped version of the actual pic.

In response to others calling out his boneheaded tweet, D'Souza posted something even more boneheaded. Now that his inference of Clinton's racist roots was deemed bogus, he deflected his mistake by immaturely commenting on her appearance instead.

Last month, in the wake of the mass shooting at the Emanuel AME Church in Charleston, South Carolina, which brought into question whether the Confederate flag should fly on the state's capitol grounds, Clinton said it "shouldn't fly anywhere." Speaking at an African-American church near Ferguson, Missouri, Clinton called the flag "a symbol of our nation’s racist past."

D'Souza probably felt intense smugness with his "aha!" moment, but it was fleeting. The Hillary Clinton Confederate flag photo joins the ranks of these other absurd, but sometimes funny, Photoshopped Hillary pics.