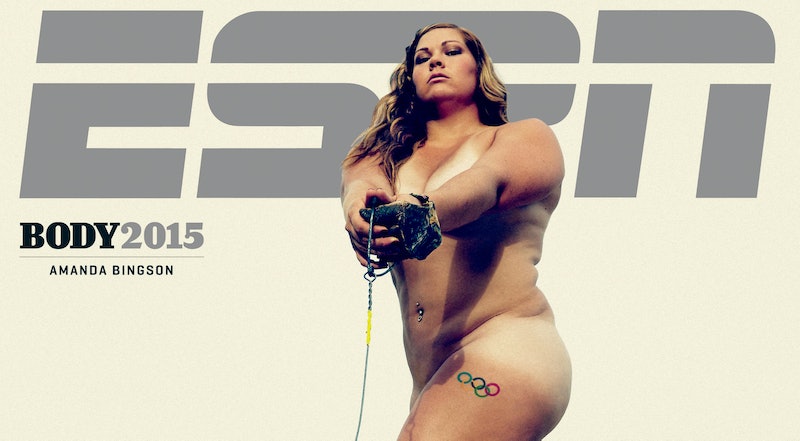 When most people think of athletes, they picture long, lean Olympians who look like they're 200 percent muscle and two percent body fat. In reality, though, athletes' bodies are as varied as the rest of us — something which the most body positive quotes from ESPN Magazine's Body Issue reflects magnificently. The world of sports has its fair share of tall, muscular Amazons, but does that mean they're the only kind of person who can make it as an athlete? Hell to the no.

If you need proof, may I present Amanda Bingson, the Olympic hammer-thrower whose Body Issue cover has been absolutely everywhere this week. Wearing nothing but a glove and a suitably fierce expression, Bingson shows that it's possible to be "dense," as she describes it, healthy, and super badass at the same time. Best of all, she is unapologetic about her size; she obviously loves her body and wouldn't do anything to change it. If that's not the definition of body-positive, I don't know what is.

Bingson may be the most talked-about of this year's covers, but the other athletes featured in the current issue are pretty freakin' awesome as well. The Body Issue's mission is to "celebrate and explore the athletic form," and as always, ESPN Magazine has gone above and beyond in accomplishing that goal. The images are proof that there is no set "athletic body type," and it's clear from the interviews that the athletes are proud of their bodies, no matter what shape or size.

In fact, I'll let them speak for themselves. Let's take a look at the seven most body-positive statements from ESPN Magazine's Body Issue:

YAAAS. Bingson is an insanely strong, badass woman, and she knows it.

2. "I don't think a perfect body is attainable."

Indianapolis Colts lineman Anthony Castonzo told ESPN Magazine that bodies that are perfect for one sport can have drawbacks in another. Preach, my man.

USATF heptathlete Chantae McMillan doesn't care about society's obsession with weight loss. Also, it's true: she is an absolute beast.

4. "Getting older makes me better, absolutely."

World-renowned archer Khatuna Lorig is 41, but she hasn't let age slow her down.

5. "I worked hard this offseason to get my body where I needed to get it because, finally, I wasn't hurt."

Washington Nationals outfielder Bryce Harper injured his hamstring in 2011, but instead of making him lose faith in his body, the season-ending injury inspired him to work harder.

United States rugby captain Todd Clever faces pressure to put on weight for his sport, but he told ESPN that if he feels prepared for the game, he's fine with his weight.

7. "As a sports fan, I love seeing the differences in body types."

For Natalie Coughlin, who has won 12 Olympic medals in swimming, body positivity isn't just about her own body.

To check out the full interviews, head over to the ESPN Magazine website.

More like this
What’s The Kibbe Body Type Test That’s All Over TikTok?
By Marilyn La Jeunesse
Bustle Newsletter: May 6, 2022
By Stephanie Talmadge
Here's How To Practice Self-Love In Small Ways Every Day
By Mackenzie Sylvester
Here's Your Daily Horoscope For May 19, 2022
By Mecca Woods
Get Even More From Bustle — Sign Up For The Newsletter