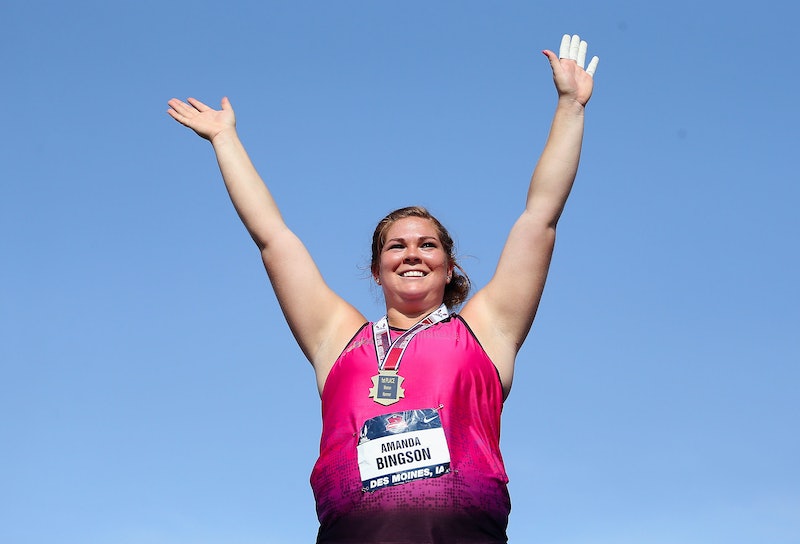 By now, you've probably heard about Amanda Bingson, the incredible track and field guru who is one of the cover stars of ESPN Magazine's Body Issue, and also happens to be plus size. This Body Issue of ESPN Magazine is released annually and features athletes across all major sports, often in the nude and looking incredibly beautiful. Seriously, the photos are done in very artistic taste.

Last year, in fact, baseball player Prince Fielder also made headlines, and despite being a naked plus size man (not something we see often in media, due to people's, you know, fear of any kind of fat), he was rightly celebrated in a body positive way. That being said, many readers I spoke to about the issue believed that that a woman with a visible gut would never be featured naked in ESPN Magazine. And heck, I believed it too. I was happily was proven wrong yesterday, though, as ESPN stepped up to the plate with Amanda Bingson's incredibly beautiful cover.

I know that athletes can come in all shapes and sizes and that there isn't one particular body type that represents athleticism, but for a long time I wasn't sure that the rest of the world realized this very simple fact. Bingson has a big and strong body that serves her so well in her hammer throwing. At 210 pounds, she was able to brake the female American record for hammer throwing in 2013. She'll also be competing at the 2016 Olympics in hopes of earning a gold medal.

If you can't already tell, I'm a huge fan of Bingson and love that ESPN is highlighting both her beauty and athletic accomplishments. I know she is doing so much for women and female athletes, in particular. Thus, I think of her as a body positive icon — and here are my six main reasons why.

We often think of strong athletes as being thin and muscular, but Bingson is strong and with a larger frame. With her broad shoulders and tough core, she's not someone I would mess with! In her interview with ESPN Mag, she describes herself as being "dense" and not someone who is a total muscle-head. "I'm just dense. I think it's important to show that athletes come in all shapes and sizes."

2. She Embodies Health At Every Size

Health At Every Size is a movement and philosophy that operates under the notion that healthy bodies can and do come in all different sizes. Bingson is clearly healthy and strong (do you think anyone can just throw an 8 to 10 pound hammer 248 feet?) and I love that she proves you can be powerful and fit at a larger size.

3. She Loves Her Body

In her interview, Bingson also spoke about body image and gave an amazing quote about how much she loves her own body. "I'll be honest, I like everything about my body," she said. So many people would probably expect her to wish she was thinner or had bulging muscles, but she adores herself exactly the way she is.

This woman hasn't had it easy and has had to overcome a lot of fat shame in her life. She told ESPN about the bullying she faced in middle school, when — up until that point — the idea that she was "too fat" hadn't even crossed her mind. "I never knew that I was the fat kid in school until a boy told me that I was too fat. I thought, 'What does that mean?' I had always been so athletic and into sports; I didn't think I was that fat," she said.

"But everybody wants to fit that skinny ideal picture that we see on billboards all the time, and people would always remind me that that wasn't me." Definitely heartbreaking to hear, but it's incredible that despite the fat shaming she faced, she was able to go on to become one of the world's greatest athletes.

Bingson discussed how her move from Las Vegas to Texas helped her gain more confidence in her body. "In Vegas, I was bombarded with all of these 'double zeros' and Abercrombie models... And when I moved to Texas, everyone here is just so open about their bodies," she said.

She went on to discuss how she constantly sees larger women in the Lonestar state looking confident in their bikinis, which has inspired her. "Now I just think, 'I'm just going to throw far because I'm confident with myself and I don't have to worry about what I look like anymore.'" There's nothing that makes me happier than women inspiring other women to love themselves.

6. She Can Do Things Many Thin People Can't

Bingson also told ESPN that people should use their bodies physically no matter what size they are, and that she even thinks she has an edge over some thin people in athletics. "There are definitely things that I can do that skinnier people can't do. But then there are things that skinnier people do that I'll never be able to do." There's no shaming in Bingson's tone, nor self deprecation. Rather, the lesson here is to make sports work for you and find out what your body is capable of.

More like this
What’s The Kibbe Body Type Test That’s All Over TikTok?
By Marilyn La Jeunesse
The Most Gorgeous Plus-Size Looks From The Met Gala
By Dominique Norman
The Best Mug Warmers For Keeping Your Coffee & Tea Hot All Day Long
By Masha Vapnitchnaia
Here's Your Daily Horoscope For May 16, 2022
By Mecca Woods
Get Even More From Bustle — Sign Up For The Newsletter