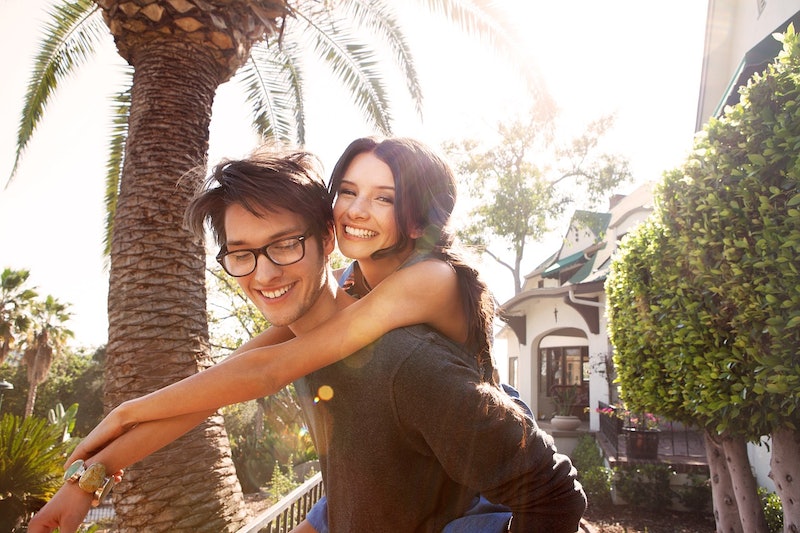 I think everyone can agree that flirting is the very first step in the dating process. You make some eye contact, give a little wink, bite your lip in that seductive come-hither way, and before you know it, you and some hottie at the bar are flirting wildly. If this sounds familiar, then you’ve probably noticed that the way men and women flirt is different, and not just because of our genders, but also our intentions.

According to new research from four separate studies from Bucknell University, published in Interpersona: An International Journal on Personal Relationships, men and women definitely go about flirting in different ways. Not only do they put it out there differently, but the cues they're looking for from one another aren’t the same. As the paper points out, women have more at stake when it comes to flirting, because biologically, they’re looking for something long-term that will result in offspring. You know, evolution hard at work and all. Women, by and large, are looking for security, both financially and emotionally, whereas men try to read more sexiness in the flirting that’s coming in their direction, because biologically, they have seed to spread and that’s what they’re going to do. Lovely, isn’t it?

Here are the four ways in which men and women flirt differently.

For men, flirting that involves some form of touching is what really sparks their interest. According to the study, the actions that most effectively suggest to men that a woman is DTF are “she kisses you on the cheek,” followed by “she rubs against you,” and “she moves closer to you." In general, any touching makes men think that a woman is open to having sex.

Because of biology, women look for flirtation that is going to lead to something besides sex. For them, the most effective flirty move is “he holds hands with you,” followed by “he spends time with you,” and of course, “he asks you out.” Also, women really like it when a man makes them laugh.

Whether it’s because we have it in the bag or, as the study suggests, we think more critically about the whole process, women are just better flirters. The study found that men use 26 different techniques when trying to get a woman’s attention, while women use only 14.

4. Men Are Less Guarded When It Comes To Flirting

Not only do men have zero shame when flirting with a woman, hence their whopping 26 techniques, but the study suggests this could be because women are more guarded. Women put less out there and are more careful in how they present themselves, because they’re “more in touch with things that actually work.” Men, on the other hand, are pretty much willy-nilly, hoping anything will work. Oh, boys.