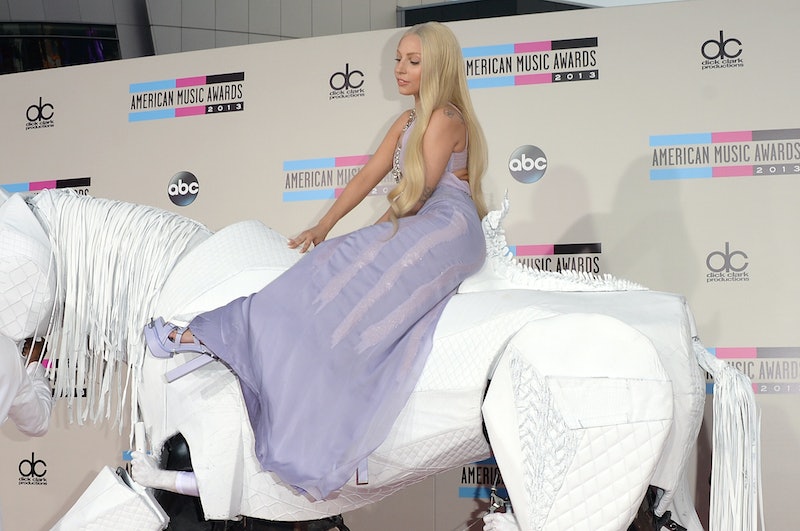 The hashtag you'll be needing to discuss the following is #VersaceLovesGaga.

The revered and yet somehow kind of trashy-looking house of Versace has been a fan of Lady Gaga for a long time. Not only did #VersaceDressGaga for her Born This Way tour, but #VersaceOpenedTheirArchivesforGaga to use for her "Edge of Glory" music video, in which she wore a vintage studded halter designed by Gianni Versace. It was apparently the first time Donatella Versace had cracked open the archives for a music video since her brother Gianni's death in 1997.

This is a symbiotic relationship; #GagalovesVersace right back. One of the catchiest songs on ARTPOP is titled "Donatella," in which Gaga beings by snarking, "I am so fab. Check out, I'm blonde, I'm skinny, I'm rich, and I'm a little bit of a bitch," and sings at one point, "Voodoo, Voodoo, Voo-Don-Na-Na." Gaga's been seen in enough Versace to break quite a few ordinary banks, and back in 2012, she even dared to wear the famous Versace safety pin dress once immortalized by Elizabeth Hurley.

It was only a matter of time before Gaga became the official face of Versace. In these ads, shot by Mert Alas and Marcus Piggott, she looks shockingly like a young Donatella — long, stick-straight blonde hair with a center part, tan skin, a very Roman nose, and, of course, head-to-toe Versace. Of the ads, Donatella said, "She is like family to me, the embodiment of the Versace DNA."

DNA is right. Check it out:

In homage to the ads, Gaga wore that diaphanous purple dress to Sunday's American Music Awards, hair as blonde and Versace-esque as ever. She also rode a white horse down the red carpet. Voo-Don-na-na would be proud.