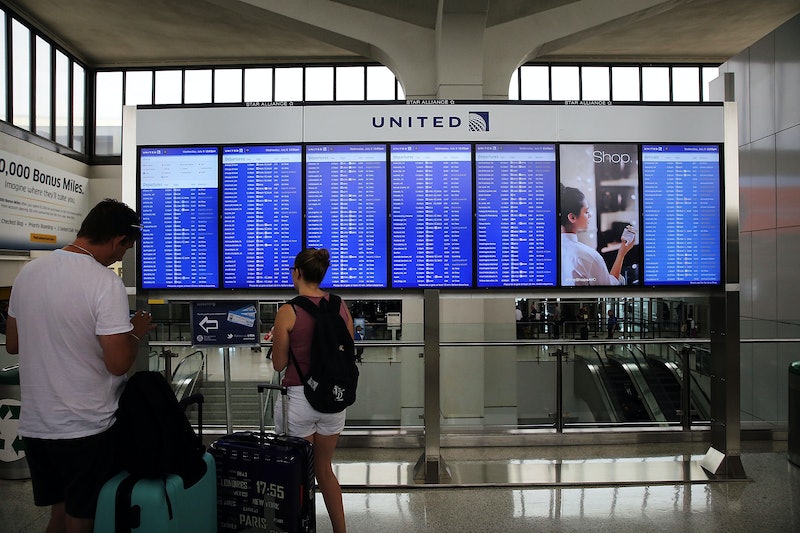 Wednesday morning, United Airlines experienced technical difficulties that grounded all flights for more than an hour. Flights were able to resume before noon, but 4,900 flights worldwide were impacted by the shutdown, according to CNN, and there are expected delays all day. If you're supposed to fly Wednesday or Thursday, you should probably check with United about delays or cancellations before heading to the airport.

Grounding flights for even a short period turns into a major problem pretty quickly, because incoming flights have nowhere to land and passengers miss connections. So the airline will probably be playing catch up for a while. To check the status of your flight, enter your flight information on the United website or call 1-800-864-8331. If you're supposed to fly today but don't want to deal with the long delays, the best option is to reschedule. United tweeted that its still recovering from the network connectivity issue and that it's waiving the fees to change flights to another day. If you re-book your flight for July 9th or 10th, the airline will waive the fee, and will also cover any difference in fare, as long the flight is still between the original cities and in the same cabin as in your initial plan. If you switch to a flight after July 10th, the fee will still be waived, but you'll have to pay any difference in ticket costs.

It's not yet clear what caused the airline's connectivity issue, but Homeland Security Secretary Jeh Johnson said Wednesday that neither United's problem nor the NYSE shutdown were a cyber attacks. Per his statement: "The malfunctions at United and the NYSE were not the result of any nefarious actor." This was the second time in two months that the airline grounded flights — last month, United stopped all flights from leaving U.S. airports due to "computer automation issues."

Follow United's Twitter for updates on the situation, or call United if you prefer to talk to a human or have other questions about the status of your flight. If you decide to suck it up and wait out the delays at the airport, there are lots of fun ways to keep yourself entertained, including some pretty epic people-watching that always ensues at the airport.

And of course, you can always do this, too: