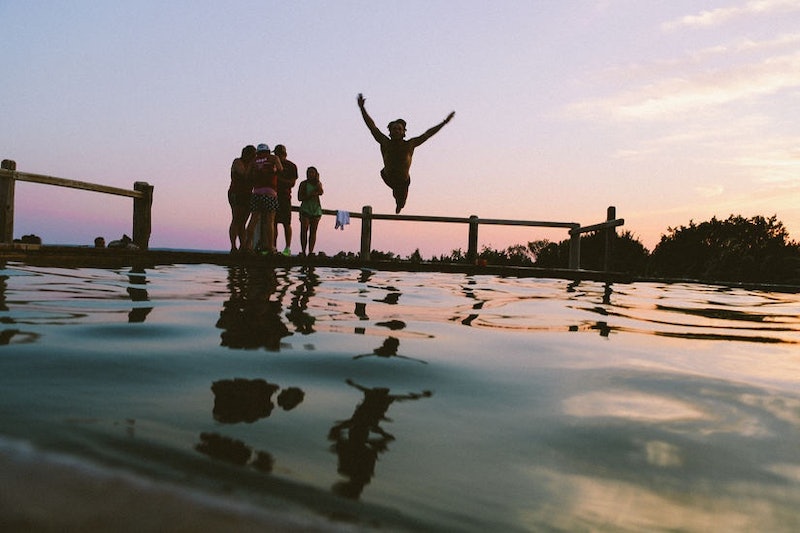 Friendships are like Pokémon. Not in that you have to catch 'em all, but that they evolve. Your Pikachus become Raichus, and it's sad, because you'll miss your adorable little buddy, but also wonderful, because you'll have something much stronger and more powerful. Your twenties are a time where you'll shed a lot of friend weight, and where casual acquaintances will become fewer and fewer. In my early and mid twenties, I had a lot of party pals, people I'd only see after midnight and when there was booze involved. Now turning 30, I'd be hard pressed to remember a lot of their names or faces. It's not out of anything malicious, just the passing of time and changing of priorities. After all, their lives have changed too, and their friendships have probably also evolved.

It's not a bad thing that friendships change. It's important. Things need to shift and change as your life does. Imagine having the same intense friendships you had at 20 when you're a little bit older and trying to have a career, a relationship, pay off a mortgage or even have a baby. The same level of commitment can't always be maintained throughout life, and the best friendships are the ones that evolve to accommodate the lives of both friends. Here are nine ways you will find your friendships evolving through your twenties.

1. The concept of "best friend" begins to fade

2. You don't see each other constantly

Life changes, you roll with it. I moved to another country. Technology makes it easier to communicate and keep in contact, but face time is rare. Even with my friends on the ground. Life often gets in the way of pal-ing around in a way it didn't used to when you were younger. For instance, work, romantic and other commitments (exercise, alone time, running errands) interfere with the amount of time you have to spend sitting around watching Netflix and doing nails with your friends. If you still have quality time together, it won't matter, and it won't change how much you love each other. You're just not joined at the hip any more.

The best thing about being older is you don't feel compelled to be friends with people just because they're there. When I was younger there were a lot of people I'd see all the time because of my social group that were, honestly, pretty crap people. As a 20-year-old, I felt compelled to be friends with everyone, but a decade later, I don't care. I will always be nice to people, but I'm not going to spend a night out talking to someone I don't really like that much when I could be talking to someone I do like. I don't feel bad about that. I don't have infinity time to spend on people I don't really care for, and the brilliant thing about getting older is that you can choose your friends based on who you like, not simply who's there.

4. You recognize the value of old friends

5. You have less patience for bad friends

Sometimes when I think about the crap I used to put up with from friends I cringe. Backstabbing, game playing—as you move through your twenties you'll start to shed whatever obligation you feel you have to people, and you'll feel better about ending friendships that are "toxic". By the time you get to the end of your twenties you should have a pretty good idea of how you should be treated, and the kinds of friendships you find enriching to engage with.

6. You realize who's going to be there when you're on your death bed

Maybe you'll keep fair weather friends around, but you wont be as disappointed by them being unreliable as you would have been at the start of your twenties. After all, your ability to distinguish between a real friendship and a fleeting one is something you develop through your twenties.

7. No one gets mad when you spend time with your SO anymore

Remember when everyone was all, "OMG, Becky is just like, always with her boyfriend!" No one is really says things like that once you get to a certain age. I live with my boyfriend, so yes, I'm with him all the time. I also make time to see my friends when he's not around. And sometimes I'll see my friends with him there too, and that's nice, because he has friendships with my friends now as well. The thing is, as you get older, and move into "serious" relationships, your friends won't get upset when your friendship changes. Your real friends understand that while you were single you'd go out with them every weekend drinking and talking to dudes until the sun came up, you're probably not going to do that any more. That doesn't mean they won't be mad if you stop seeing them altogether. Just that people become more understanding that parties switch to happy hours and brunch without having slept to, well, regular brunch.

8. Being there for each other means something different

Being there for your friends when you're twenty means helping them drink the night away when a boy hurts them, or holding back their hair when they drink to much. As you get older, being there means helping you move, watering your plants when you're on vacation, and listening to you talk about your biological clock.

9. You're not as annoyed by trivialities

There was a time where anything your friend did would annoy you. Even sneezing the wrong way. Once you get into your late twenties you stop stressing the small stuff, like their tone when they advised you, the fact that they talked to a guy at the bar instead of spending the whole night joined at your hip, or that they didn't text you back immediately. Basically, you stop getting annoyed about every little thing they do that isn't in line with exactly what you wanted them to do. You learn to pick your battles.