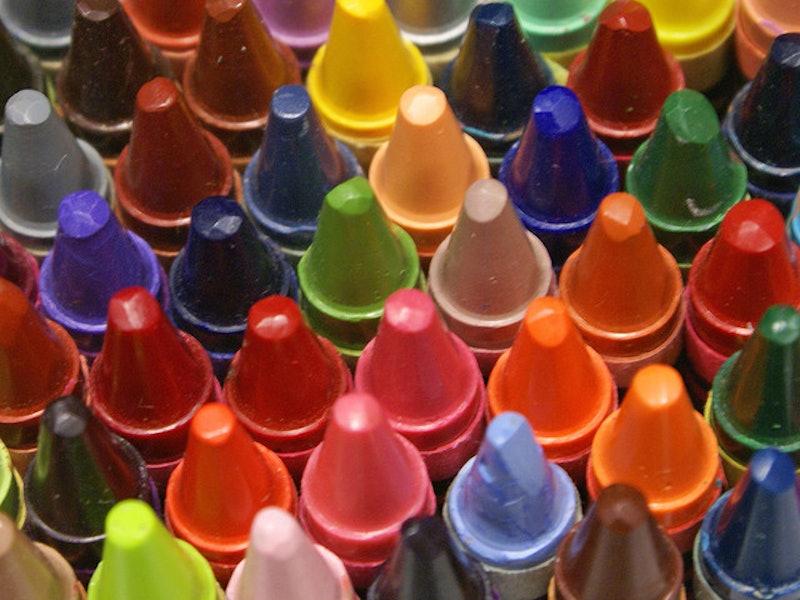 Well, this is pretty disturbing: According to a new study released Wednesday by the Environmental Working Group's EWG Action Fund, traces of harmful asbestos fibers have been found in children's crayons and detective kit toys from several different brands made in China. What's more, the study was actually a follow-up to two previous ones done in 2000 and 2007. Though researchers were crossing their fingers that by now, manufacturing processes would have improved and no asbestos traces would be found, that unfortunately was not what the most recent study indicated.

According to the study authors, trace amounts of asbestos were found in four different types of crayons out of the 28 different brands they tested: Amscan Crayons, Disney Mickey Mouse Clubhouse Crayons, Nickelodeon Teenage Mutant Ninja Turtle Crayons, and Saban's Power Rangers Super Megaforce Crayons. The study claims asbestos was also detected in two different crime lab kits: the EduScience Deluxe Forensics Lab Kit and Inside Intelligence Secret Spy Kit, which allegedly both contain a fingerprint dusting powder the toxin was apparently lurking in. It was not noted, however, just how much asbestos was found in each product.

But in case you're thinking "trace amounts" may not sound all that threatening, study co-author Sonya Lunder would like to remind you of one very important fact: asbestos is deadly and cancer-causing. "This is a chemical known to kill people," Lunder told Yahoo! Parenting. And the fact that manufacturers have been called out before for the issue and allegedly still have not improved factory conditions? Researchers are not happy. "It's not good news that every seven years we have to have an asbestos scare like this," added Lunder.

As for their best guesses as to why the study found asbestos in these toys, researchers have a few ideas, though none have been proven. One theory, says the report, is that manufacturers might have used talc as a binding agent when making the crayons and powders for the crime lab kits. Talc has been known to contain small amounts of asbestos, and toy manufacturers were warned about the dangers of using it after each of the EWG's previous studies.

According to the study authors:

The Consumer Product Safety Commission conducted its own tests on crayons [in 2000], concluding that the risk of exposure was "extremely low" but that "as a precaution, crayons should not contain these [asbestos] fibers. The commission said it would "monitor children’s crayons to ensure they do not present a hazard," but it has not banned or regulated asbestos in crayons, toys or other children's products. Seven years later asbestos was found in the fingerprint powder of a similar crime scene kit.

According to Lunder, switching from talc to another adhesive wouldn't be too hard — after all, Crayola already did it following a previous study. "It's a fully replaceable item in kids' toys, and there's no reason to be exposing them," said Lunder. And even if the traces were very low, she says that's irrelevant. "The results are significant because even trace exposure to asbestos can cause cancer and other fatal lung disease," she added. Perhaps the most alarming part of all of this is that if children are exposed to the asbestos and their health is negatively affected, the symptoms wouldn't even begin to show for years. For example, mesothelioma, the study explains, is more likely to lay dormant and develop later in life.

Though the study's results are alarming, it may be a while before anything official is done about stopping the sale of any allegedly contaminated products. And while that sounds kind of mind-boggling, Scott Wolfson, a spokesperson for the Consumer Products and Safety Commission, explained why to Yahoo! Parenting: An official ban on the crayons and toy kits would have to come all the way from Congress, and that, unfortunately, would take some time. It also should be noted that while the EWG is a highly respected organization, a much wider study would need to be conducted on an official level to confirm the findings.

As for where the allegedly contaminated products were found, researchers say that one of the kits was sold on Amazon, while the rest were sold at Party City, Dollar Tree, and Toys"R"Us stores in Pleasant Hill, California. According to the report, each had been made in China and imported to the U.S. by Amscan, Greenbrier Industries, and MII Inc., though researchers note that it's unclear whether the companies whose names or trademarked characters appear on the packages actually manufactured the products, or simply licensed the use of their trademarks. Though Bustle reached out to the companies named in the report for comment, not all had not responded as of Wednesday.

A spokesperson for Toys"R"Us did tell Bustle that the products in question are already being reviewed. In an email Wednesday, the popular toy chain said:

The safety of our customers is, and always has been, our highest priority. We take this responsibility very seriously. We require that every product we carry meets or exceeds all applicable state and federal laws, industry standards, codes and requirements. At this time, we are reviewing the referenced report, along with supplier test reports, to ensure full compliance to our strict safety standards.

On Thursday, Randy Guiler, VP of Investor Relations for Dollar Tree, also responded in an email to Bustle, saying that the retail chain would also be reviewing the matter further:

We are in the process of reviewing the report issued yesterday regarding test results on a few of our supplier's products. Dollar Tree employs a robust and stringent CPSC-accredited, independent-testing laboratory to ensure that our imported products meet all safety and legal standards.

Amscan is dedicated to ensuring that all of its products meet or exceed federal, state and municipal requirements. We're cooperating with the Environmental Working Group to further understand their findings, and we're in the process of removing the merchandise in question from all of our stores nationwide. Pending the results of an internal investigation, we shall take all necessary actions to continue maintaining a high level of quality and safety in products. Any product that fails to meet governmental or Amscan's standards will not be distributed or sold.

For their part, the CPSC is also looking into the concerns, though they may not be able to push for any legislative moves just yet. "We have a lot of respect for EWG and take the report very seriously," said Wolfson. "Our staff is going to follow up on the report and look into the products that were identified."

More like this
Starbucks' Summer Menu Includes A New Chocolate Cream Cold Brew
By Emma Garza
How The City Healed Five Years On From The Manchester Arena Attack
By Ella Glover
Meet The Spice Company Founder Who Sees Chai As A Metaphor
By Madhuri Sathish-Van Atta
If Your Refrigerator Is A Mess, These 25 Organizing Products Can Help
By Courtney Young
Get Even More From Bustle — Sign Up For The Newsletter