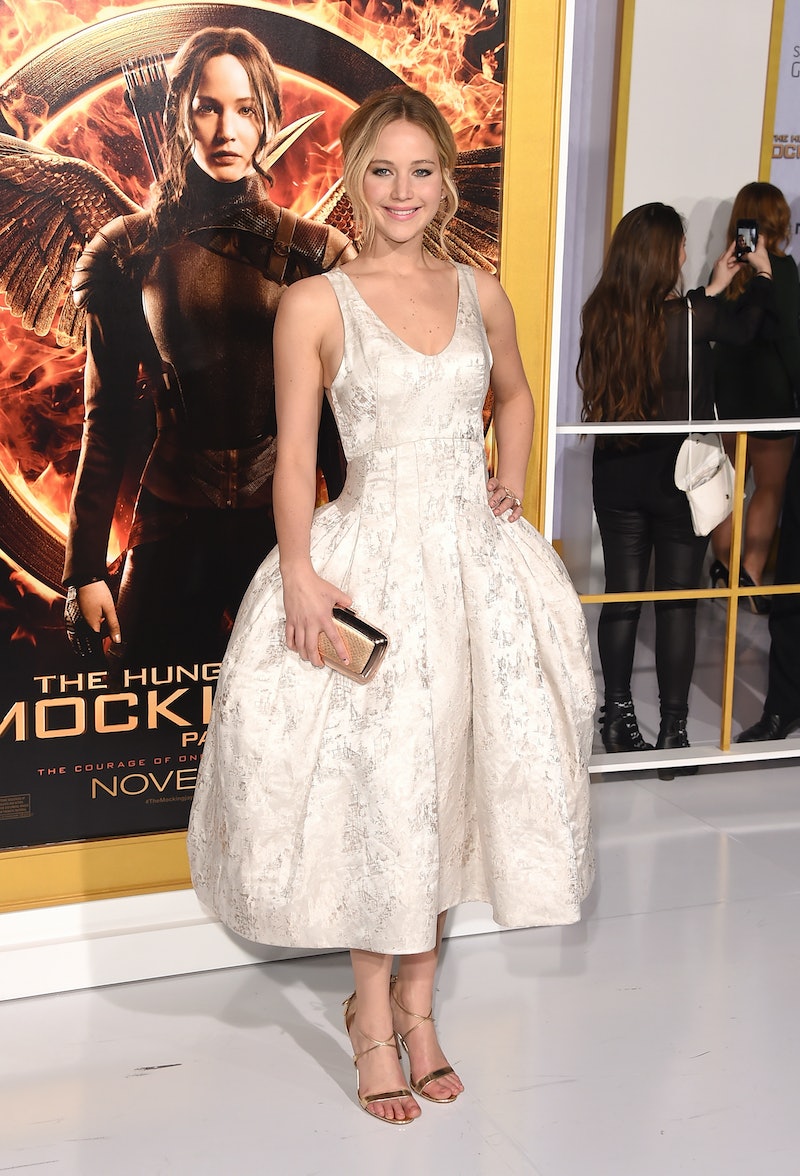 In case you missed it, a new teaser for The Hunger Games: Mockingjay - Part 2 hit the web on Wednesday through Jennifer Lawrence's Facebook profile, and it's a doozy. For the majority of the video, there are no words seen or heard — instead, all we see is J. Law's profile as she stares stoically off into the distance. The camera pans out and we see her standing on the edge of a large, stone sculpture of the Mockingjay salute. Not only is the clip indicative that the new film is bound to be an incredible one, but it also indicates just how much the The Hunger Games franchise's marketing strategy has changed since the first film hit theaters.

Specifically, it seems that with every installment in the franchise, teasers and promos have been gradually distancing themselves from the direct logos as seen on the books, and are focusing more on Jennifer Lawrence. Just look at this new Mockingjay — Part 2 teaser: No title of logo is used, because seeing J. Law in the role is assumed to be hint enough that this is a Hunger Games promo.

When Lawrence was cast as Katniss Everdeen back in 2011, she was relatively unknown as an actress (though she was fresh off of an Oscar nomination for Winter's Bone). Fans of the books initially decried her as too pretty and too old, and wondered how she would be able to pull off Katniss' hardcore, badass personality. However, when the movie came out in March 2012, Lawrence proved everybody wrong: critics universally praised her performance, and her face became synonymous with the franchise.

Before the film was released, Lawrence was less of a focus in the advertising: As can be seen in the poster above, Lawrence's face is slightly obscured by the arrow and the shadow. She is not the focus of the campaign at all.

With critics and fans on J. Law's side, she was put more front-and-center during the marketing for Catching Fire, so her newfound popularity could be used to the film's advantage. At this point, J. Law had already won her Oscar for Silver Linings Playbook, and became the second-youngest Best Leading Actress winner of all time.

By the time Mockingjay — Part 1 rolled around in 2014, the world had been struck with full-blown J. Law fever, and Lawrence was even ranked as Hollywood's Most Valuable Star. Her face and power-stance were the focal point of Mockingjay - Part 1's marketing, with her even standing in front of and obscuring the official Mockingjay logo.

It was a natural evolution to today's release of a teaser that has no words, no logos, no mockingjays — JUST J. Law herself. That's all that's needed to sell the movie now, both because Lawrence is a powerful star and because, at this point, fans are hooked. The new teaser doesn't even say "Hunger Games" or "Mockingjay," but things like "United13." J. Law is all that we need.

Additionally, the latest poster — while including the title at the bottom — has J. Law front and center, not competing with fire or logos for our attention. Her sheer star power, with help from that incredible red uniform, do the trick.

Who else is pumped up for this movie?