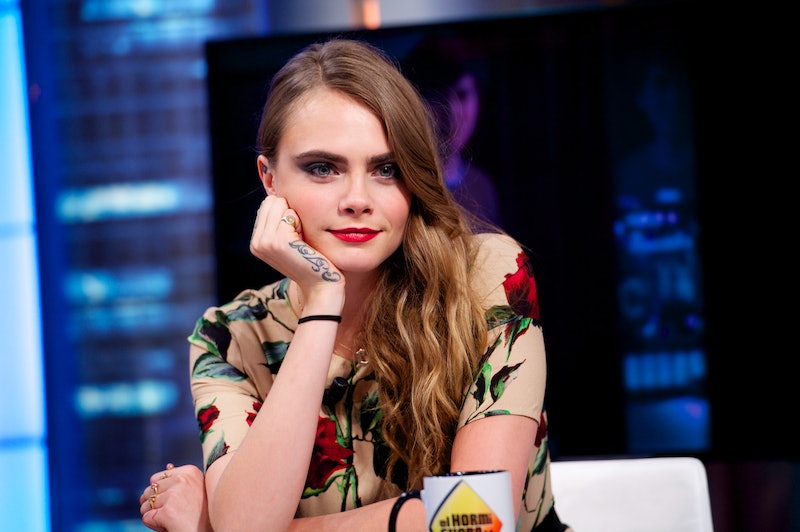 Let's just go ahead and admit that Cara Delevingne's eyebrows are the stuff of legend. There's probably not a single person in the world with an internet connect that doesn't know the Chanel muse has perennially on fleek brows. Like any normal person, YouTube star and singer Troye Sivan recognizes Delevingne's brow mastery, and on the red carpet for the Australian premiere of Paper Towns, Troye Sivan asked Delevingne to fill in his brows in a video that's at one time adorable and hilarious.

Sivan is an insanely popular YouTube personality, and if you haven't seen his videos, you've probably heard at least one of his songs. The singer released a gorgeous fan song in honor of John Green's first novel to film adaptation The Fault in Our Stars. The TFiOS inspired song was incredibly popular, but unfortunately didn't make it onto the mega popular soundtrack. However, that didn't stop Sivan from getting an invite to the set of Paper Towns last year along with several other YouTube stars to do a question and answer session with Green. Though he was on set, it doesn't appear as if Sivan was able to meet the woman playing enigmatic Margo Roth Spiegelman in the film. Now, however, he's got his chance.

Sivan attended the Australian premiere of Paper Townson Sunday, and thankfully for us, he documented his experiences. After a bit of getting ready, the YouTuber headed to the red carpet where he was greeted by Cara. Sivan explained that while on the set, he wasn't able to met Cara, and the ever gracious Delevingne seemed genuinely saddened. It was after this exchange and a couple of photos though that true magic happened resulting in the masterpiece that is a Delevingne constructed and Delevingne inspired eyebrow look.

Troye brought his own eyebrow pencil to the premiere, and Cara couldn't have looked more pleased to oblige his request to get on fleek eyebrows like her own. After she was done, Cara exclaimed, "Holy s—t, does he not look like a different person?" Proving once and for all that your eyebrows are the most important part of your face.