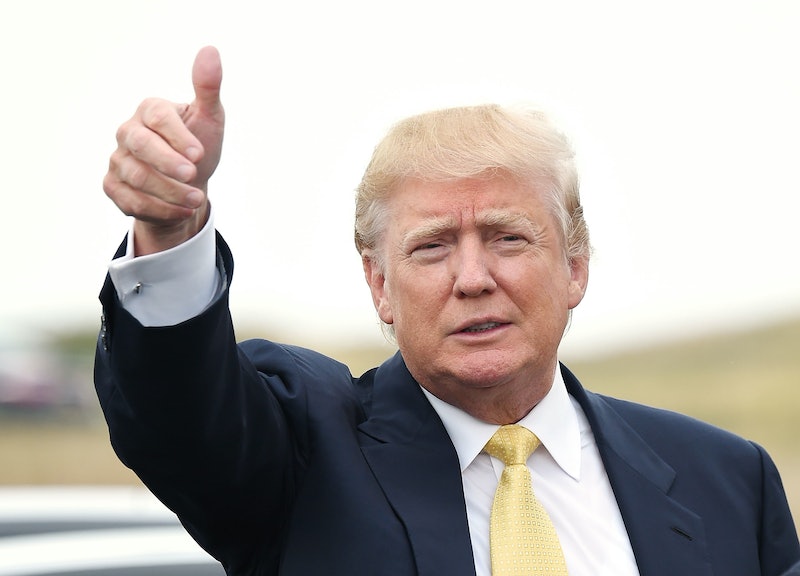 Just when you thought he couldn't say anything else that would shock you, Donald Trump proves you wrong. (Because there's no way it's just me, right?) In an interview with NBC News' Katy Tur, which aired Wednesday night, Trump confidently said that he expects to win the Latino vote in 2016. Given his recent comments and his party's ongoing struggle to appeal to Hispanics, however, that seems highly unlikely. Trump told Tur:

And I'll tell you something. If I get the nomination, I'll win the Latino vote. I will win it because I'm going to create jobs.

He also mentioned that he has "a great relationship with the Mexican people." This is just the latest in a long string of controversial comments that the Donald has made about Hispanics and illegal immigration. While it could be a good thing that Trump is drawing attention to the hot-button issue of illegal immigration, some GOP leaders worry that he's damaging the party's reputation. What's more, the GOP has faced declining Latino support in recent elections. With Trump still on the loose, it could be difficult for any Republican to capture the Latino vote in 2016, let alone Trump himself. Cue the Hillary Clinton "I-told-you-so" meme:

In all seriousness, Trump would probably have a hard time winning the Latino vote before he made any of those outrageous statements. In 2012, 71 percent of Latino voters voted for President Barack Obama. Just 27 percent voted for Republican Mitt Romney, according to Pew Research Center. In 2008, a similar story: Just 31 percent of Latino voters supported Republican John McCain, whereas 67 percent voted for Obama. In fact, Democratic candidates have won the Latino vote in every presidential election since at least 1980.

Even if the way he goes about it seems totally wrong, Trump is right to focus on the Latino vote and he's right to emphasize jobs. In 2012, Hispanics made up 10 percent of the electorate — and they've grown steadily ever since. In a competitive race like this one is shaping up to be, that could be the boost a candidate desperately needs.

Research also shows that Hispanics prioritize the economy over other issues, including immigration, when it comes to voting. While the Hispanic workforce has grown steadily for about a generation, Latino unemployment is through the roof — 6.9 percent according to CNN Money. (The national average overall unemployment is 5.5 percent.)

Could Trump's jobs platform outweigh his outrageous immigration comments? Could anything bolster the GOP enough so a Republican can win the Latino vote in 2016? In both cases, it would probably help if Trump kept quiet for a little.