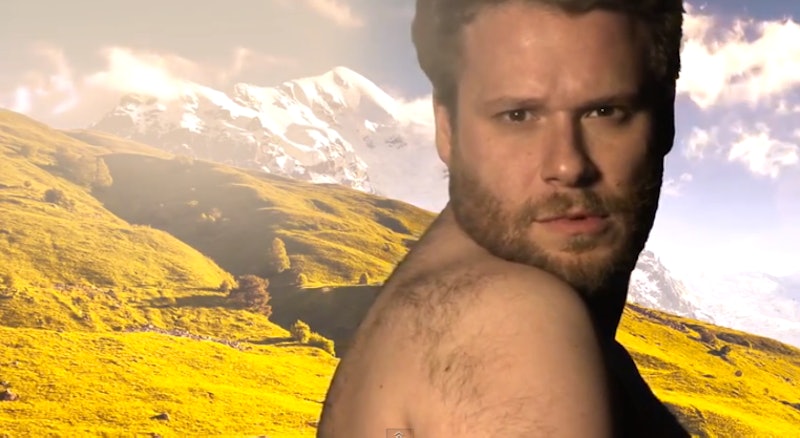 We knew the minute we hit play on Kanye West's Kim Kardashian-featuring music video "Bound 2" that we were witnessing something... special? Memorable? At least something we'd remember for the next few months. Well, the whole thing's become even more memorable (and validated), because it now has its first celebrity parody video! Courtesy of James Franco and Seth Rogen as West and Kardashian, respectively.

It seems celebrities are getting more and more downtime on their sets these days — or at least their publicists are itching for new ways to promote those movies they're filming — because after Channing Tatum's Jean-Claude Van Damme splits "stunt" last week, this music video parody/remake thing isn't terribly original.

Of course, not being terribly original doesn't stop something from being hilarious. Because who among the Apatow-watching of us doesn't want to see Seth Rogen in a role previously reserved for Kim Kardashian?

The video itself is a shot for shot "remake," by which we mean all Franco and Rogen and whoever shot it had to do was set up a bike in front of a shadily-lit green screen and go at it. There is, as is befitting a tribute/mocking/whatever of the original, lots of cuddling. Which is nice. We like cuddling.

The million-dollar question is: Will Kanye West (and or, plot twist, Kim Kardashian) go on a Twitter tirade about this one? Or will the cuddling save us all?