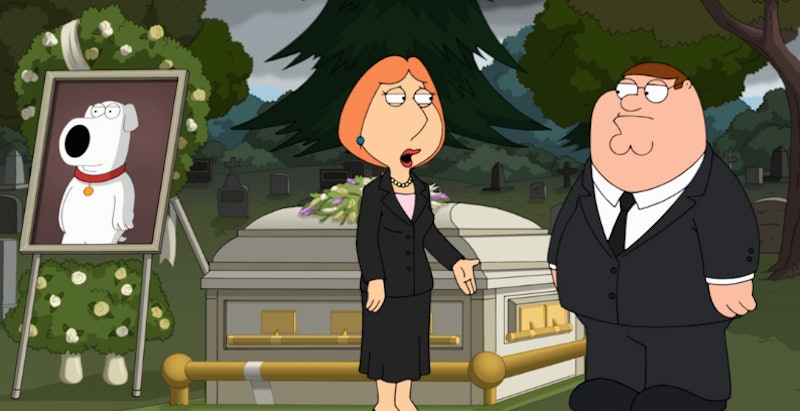 Today we gather to remember Family Guy's Brian Griffin, a loving family member, trusted friend, famous novelist, and favorite uncle in the Griffin house. Although Brian's passing was altogether too soon, we will all remember him in his essays and his novel Faster than the Speed of Love. He died on Sunday night, and we miss him already.

Brian was a dreamer. He thought big things, howled at the moon, and often asked his family members the deep questions about life. His weekend with Stewie made him the super-genius-baby he is today. His frequent discussions with Peter showed not only his loyalty to his best friend, but his awareness of the true meaning of friendship.

After all, Brian was a literary soul. Although we never got him to sit down and read Faster than the Speed of Love, we are sure it was a great work of fiction, completely unrelated to the movie Iron Eagle. Despite never graduating college, he won awards over his lifetime for his intellect, including a featured spot in The New Yorker, a heavily-used MENSA membership, and numerous awards for his essays. His ability to craft clever tales, along with his gift for gab, will make an impact on many generations to come.

Let me tell you about the first time I met Brian. I was at a bar, late on a Wednesday, and I saw a morose dog drinking a martini and smoking. As the night wore on, he broke into song many times, often singing rousing renditions of Sinatra tunes. Eventually, I got up the courage to speak with him, and I learned his story of almost-completed college, homelessness, a cocaine habit, and, eventually, love and acceptance with a new family. I was moved, and I have kept track of his lovable and extraordinary exploits ever since.

Brian was not without his faults, though, and his primary issue was loving too much. He loved many women over the years, and although none of them stuck, his love for the Griffin family remained. He also burned a candle for Lois, even though he knew he could never act on his desires for fear of hurting he husband, Peter. Regardless of its target, though, Brian was always a bestower of great affection. After all, his last words were "You've given me a wonderful life. I love you all." Such sincerity, such brevity has been unmatched by canine and human companions throughout history.

Brian, we all hope you don't have to hump anyone's leg to get a martini in heaven. Rest in peace, old buddy, you will never be replaced.