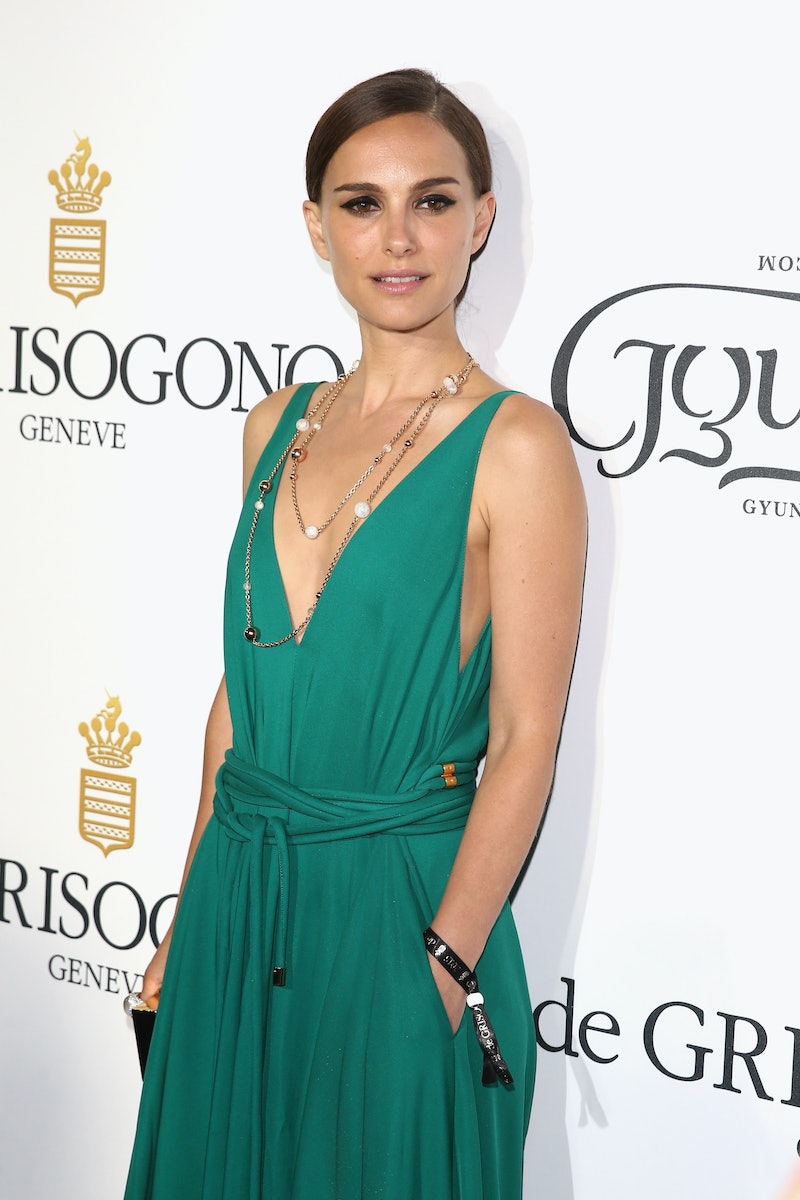 Well, a recent chat Natalie Portman had with Harper's Bazaar might surprise her fans. It's no secret that the Oscar-winning actress is a feminist, so when I read that Natalie Portman wants more #AskHimMore — and seemingly less #AskHerMore — to say I was shocked is an understatement. Now, the Thor actress didn't come outright and say she doesn't support the #AskHerMore campaign, which encourages reporters to ask women other questions than just "Who are you wearing?" However, Portman appears to be tired of being asked political questions and would rather talk about her dress. Furthermore, the 34-year-old thinks "men need better" questions.

As the Harper's Bazaar August 2015 cover star, she told the magazine she's constantly asked about Prime Minister Benjamin Netanyahu and U.S. foreign policy. She declared, "I get asked so many questions about the Middle East, and I'm like 'Can you please just ask me about my dress? Let's just talk about the dress!'" For those unaware, Portman is very politically active. On more than one occasion, she's commented on Netanyahu's leadership and French anti-semitism. Those topics aren't something she usually shies away from, so to hear she'd rather talk about her dress is surprising.

Now, I don't believe the actress who will soon play Ruth Bader Ginsburg and Jackie Kennedy is saying topics other than fashion aren't important talking points. And, to be clear, I don't think fashion should be ignored completely, especially on a red carpet. Those who work in the fashion industry work hard at something they're passionate about and should rightfully be recognized for their hard work. However, I'm also an advocate for #AskHerMore, because for far too long women haven't been asked hard-hitting questions like men. Maybe Portman is looking for a change of pace and wants to answer more lighthearted questions, rather than talking politics left and right?

Portman continued, "I like to look at what people are wearing, but I do see the sexism in it. Yeah, you could reject it all, but I don't know anyone who has done that and been able to maintain the level of work I'd like to maintain."

I don't think actresses are looking to "reject" the topics of fashion and motherhood on the red carpet, or in general. They're just fighting for gender equality and the dissolution of double standards. However, if an actress did "reject" fashion altogether to focus on their work and other important issues, I believe she could still maintain her career at a high level. I mean, look at Jane the Virgin star Gina Rodriguez, who's broken the mold on more than occasion through her fight for the Latino community, talking body positivity, and redefining what an actress can bring to the table outside of her work.

Seeing as Portman is a mother (she has a son, Aleph, with husband Benjamin Millepied), I understand why she'd might want to talk about her family and the important role being a mom plays in her life, because motherhood, at least in my opinion, is an extremely tough job. I'm not a mom myself, but I've seen how hard my own mother has worked at being a mom. With that said, Portman also believes the tables need to be turned when it comes to parenthood. She feels men should be asked more about fatherhood, because parenting isn't purely a women-only topic. I wholeheartedly agree.

As she said, "Most men I know are dealing with the same issues. Maybe those questions need to be asked of men too. Maybe the men need better questions." If we're really trying to improve gender equality, then, yeah, maybe we should #AskHimMore, too, and flip the tables for a more all-encompassing conversation.

Seeing as Portman is an educated and profound woman, I guess it shouldn't come as a huge shock that she's analyzing gender equality and looking at it from all sides and being honest about what she believes in. I agree with Portman on some of the points she's making, but as a woman it would've been nice to hear the actress say "hell yeah" to #AskHerMore.

More like this
Sandra Bullock, Girlboss Extraordinaire
By Matt Harkins & Viviana Olen
Spice Girls’ Net Worth: The Richest Member Is Wealthier Than The Rest Combined
By Hugh McIntyre
Penn Badgley & Leighton Meester Met On A Horror Movie Set Before 'Gossip Girl'
By Jake Viswanath
Kim Kardashian Remembers Her Last Words To Death Row Victim Brandon Bernard
By Jake Viswanath
Get Even More From Bustle — Sign Up For The Newsletter