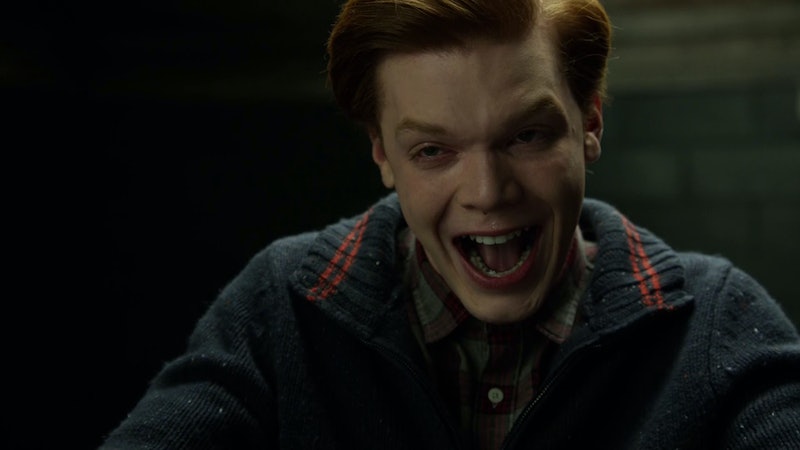 One of the things I love most about the Fox series Gotham is the fact that it keeps you on your toes. The show is riddled with villainous characters, but it felt like we've been waiting forever for everyone's favorite supervillian, the Joker, to make his first Gotham appearance. But, is it possible that it's already happened? It could be. In the 16th episode of the series that aired in February, "The Blind Fortune Teller,” we were introduced to Jerome Valeska, a maniacal circus worker who murdered his mother Lila in a fit of rage because he is disgusted by her sexual activity. But, is Jerome, who's portrayed seamlessly by Shameless' Cameron Monaghan, the Joker on Gotham ?

In the episode, Jerome’s disgust for women, and his preoccupation with his mother’s sex life were horrifying to see. When asked why he murdered his mother, he showed no remorse; in other words, Jerome’s attitude certainly fit that of the Joker’s psychopathic nature. While in the interrogation room, Jerome learns that his father is Paul Cicero, an elderly fortuneteller at Hayley’s Circus. Though he seems shocked at first, he breaks out in a terrifying laugh as if the entire thing was a joke — very Joker-like.

Another hint that Jerome could be the Joker: It doesn’t look like we’ve seen the last of him. After all, Monaghan dropped a major hint on his Instagram that suggests he really he’ll be heading back to Gotham , and the enclosed image seems like a huge spoiler:

Though Monaghan doesn't explicitly say that his character Jerome is the Joker, what little the show has offered about the character seems to add up. There are a ton of origin stories about the Joker, but Gotham's Jerome definitely has the Clown Prince of Crime's roots.

According to io9, the Joker was first introduced in Batman's universe in 1940 by Bob Kane. Kane was said to have based the character off of a silent film from 1928, titled The Man Who Laughs. Like Jerome, the Joker was a ruthless killer when he originally appeared in the comics — however, his character was softened quite a bit for several decades so that the Batman series could be geared towards children.

According to io9, after the Batman comics had difficulty selling during the '60s, artist and writer Neal Adams and Dennis O’Neil decided to return to the story's more mature roots. So, in 1973, the Joker appeared again but no longer as a clownish thief — instead, he once again became a killer. Like Jerome, the Joker was to be feared, and not mocked.

When Paul Cicero revealed to Jerome that he's his biological father, Jerome at first seemed devastated. All of his life, he had assumed his father was a sea captain, and that he'd died at sea. However, just as I was beginning to feel sorry for him, he stopped crying and began cackling. Clearly, his reactions show that, like the Joker, he's not quite sane. Heath Ledger's version of the Joker in the The Dark Knight was based almost solely on the insanity of the character, so, if that's any indication of where Jerome is going to end up, Gotham will soon be in chaos.

One of the things that made Jack Nicholson's portrayal of the Joker in Tim Burton's Batman so great was Nicholson's focus on the Joker's obsession with appearance. In "The Blind Fortune Teller,” Jerome tells Paul Cicero that his mother would "never touch a pathetic old creep." So... could that be a hint?