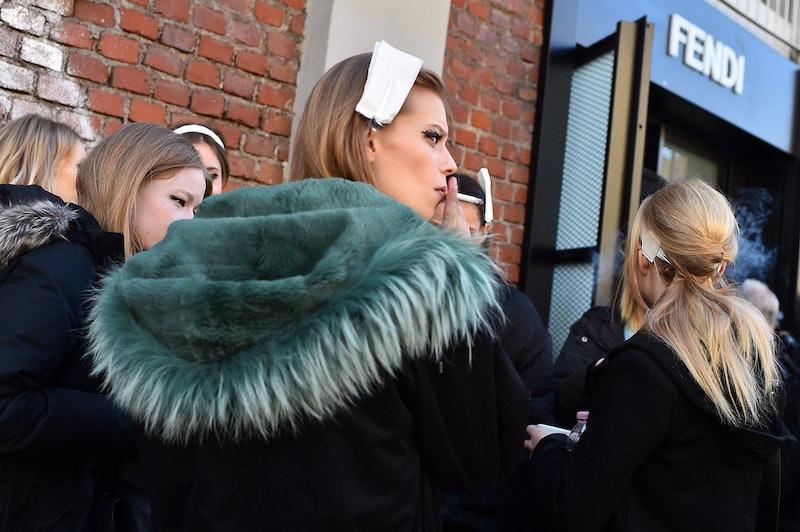 Wednesday marked the first-ever Fendi haute couture show in Paris, which was met with a lot of excitment, but also a lot of controversy. Earlier this year, Fendi's creative director A.K.A. Chanel's fashion mogul Karl Lagerfeld announced that the couture show would be entitled "Haute Fourrure," which is basically a French pun on the fact that Lagerfeld used a lot of fur in this collection. I mean, a lot.

Despite the fact that designers are trending toward using the faux version of pelts, Lagerfeld soldiered on with his mostly fur collection, possibly because he views the use of fur as a necessity for the Fendi brand.

I'm not just talking a couple of fur coats here. Nearly every look that hit the runway had some form fur in it, whether it was a long fur scarf paired with a white gown, or a white, feather-like cape that barely looked like fur at all. Though a controversial collection for sure (I'm personally against the use of inhumane textiles, especially when faux versions can look just as trendy), Fendi's first go at haute couture was, indeed very Fendi. In for that, I'm sure Lagerfeld is patting himself on the back.

But many of the protesters who were spotted outside the venue, are definitely not going to give Lagerfeld a standing O for this line. The New York Times' fashion critic Vanessa Friedman spotted a protest sign that depicted Lagerfeld kissing his beloved cat, Choupette, paired with a caged animal that read (translated) "For me, love, for him death." Wow.

Check out some of the highlights of the collection below, and be the judge yourself on Fendi's choice in fur, and if such controversy was really necessary to make a great haute couture line:

Fabulous, but let's be real — would using faux have been so bad?