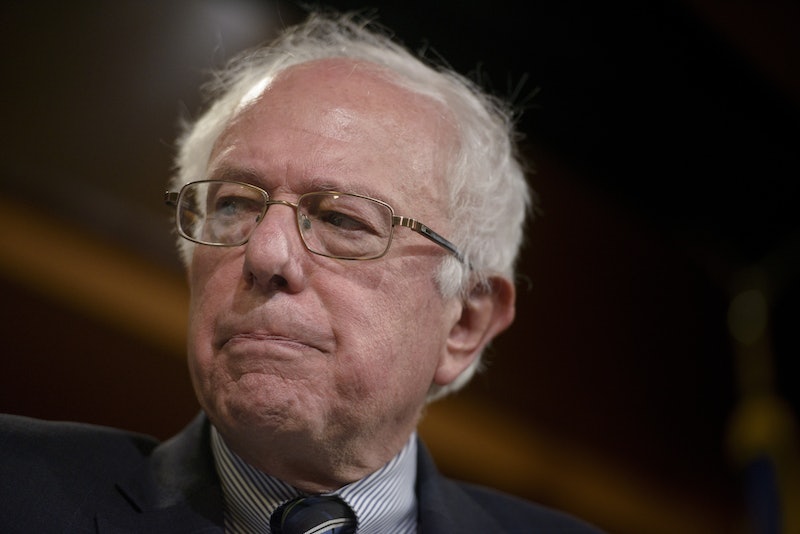 For many people, Bernie Sanders is a progressive champion. A self-declared democratic socialist, Sanders is constantly speaking out on economic inequality and climate change, and he has made equal access to education one of his top priorities. But many voters of color think that Sanders needs to center anti-racism efforts in his campaign. As a recent Vox article illustrated, his base is predominantly white and male, and Democratic frontrunner Hillary Clinton is beating Sanders among both white people and men. Even more interesting is the fact that, in a May 2015 Washington Post poll, Clinton is shown to be beating Sanders among voters of color by 67 percentage points.

This likely has a great deal to do with his approach to the primaries. In an interview with Vox, senior Sanders adviser Tad Devine said that the Vermont senator's strategy involves doing well enough in Iowa and New Hampshire that donors will give again, so that Sanders can then use the new money to appeal to voters of color, particularly black and Hispanic voters. But as a petition asking Sanders to focus on racism pointed out in June, Sanders' decision to hold off on this topic — despite his good track record of protesting for and voting in favor of civil rights — could be politically fatal and lose him the primaries.

That's not to say that Sanders does not speak out about racism. As he has said on many occasions, he was arrested during a protest when he was a student at the University of Chicago, where he worked to end segregation in schools and housing. He was also at the March on Washington in 1963. But one important reason he's received so much criticism from voters of color is that he does not focus on racial injustice nearly as much as he does economic inequality. Obviously, these two things heavily intersect, and communities of color are often at an economic disadvantage when it comes to education and access to other fundamental resources. However, Sanders frequently attributes racial inequality almost entirely to economic inequality, which means he misses valuable opportunities to demonstrate an understanding of structural racism.

Speaking explicitly about structural racism entails more than just a discussion of how economic inequality results in the imprisonment of black youth. A frank conversation about structural racism necessitates a discussion of undocumented immigration, of police brutality, of voting rights. These struggles have roots in economic inequality, certainly, but they are also rooted in the racial inequality upon which the U.S. is founded.

In the aftermath of the shooting at a historically black church in Charleston, Sanders gave one of his most frank speeches yet on racism in the U.S. He said that the country has seen a lot of improvement since his days as a civil rights activist, and that the election of Barack Obama was a sign of progress, but that we still have a long way to go in the fight for civil rights.

And yet, the following day, a rather testy interview with NPR reiterated Sanders' long-held perspective on racial and economic inequality. Clinton received a lot of pushback — and rightfully so — when she said "all lives matter" instead of "black lives matter." Sanders didn't go quite that far, but he still misunderstood the significance of the #BlackLivesMatter movement.

Phraseology, of course I'd use that phrase. Black lives matter; white lives matter; Hispanic lives matter. But these are also not only police matters, they're not only gun control matters, they are significantly economic matters. ... Because it's too easy for quote-unquote liberals to be saying, 'Well, let's use this phrase.' Well, what are we going to do about 51 percent of young African-Americans unemployed?

Sanders seems to believe that economic injustice is a sufficient explanation for everything, but it is not. Economics alone cannot explain police brutality or gun control, and trying to use it as a solitary tool means ignoring the United States' history of settler colonialism, Manifest Destiny, and white supremacy. It is unlikely that Sanders lacks an understanding of these concepts, but he needs to be more explicit in speaking out against racial injustice if he wants to appeal to voters of color.

While not exactly justified, it is understandable why Sanders is having trouble explicitly addressing racism. He represents the predominantly white state of Vermont, and has never really had to figure out how to win the votes of white people and people of color at the same time. Sanders has shown that he understands intersectionality pretty well: He has criticized many liberals for concentrating on individual issues while not seeing the connection between them. Unfortunately for him, though, his version of intersectionality relies on tying everything back to economic inequality, when it is not in fact the only available explanation for social injustice and systemic oppression.