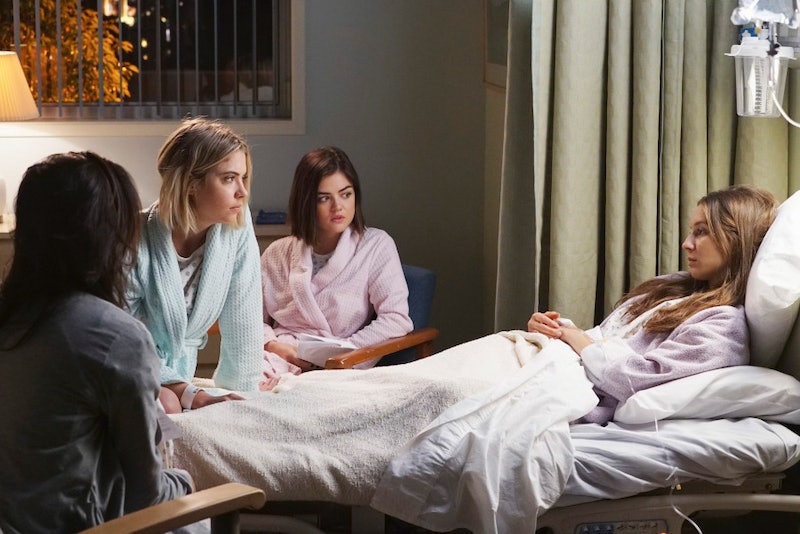 If you thought that this whole "who is A?" mystery on Pretty Little Liars couldn't get any juicier, it looks like there are now some real world implications to the big Pretty Little Liars reveal. On Wednesday, a Reddit user claiming to be a fired production assistant on Pretty Little Liars offered up what they called "spoilers" on the message board, which claimed to answer some of the biggest questions fans have ever had about the series — including the truth about A's identity. Of course, "the truth" assumes that they're real, which leads me to ask... are the Pretty Little Liars spoilers real?

Don't fret, guys: according to showrunner I. Marlene King, they are so not. In an Instagram post on Thursday, King said no one was fired from the Pretty Little Liars set and no one has revealed Charles' identity — which means that the Reddit spoilers are totally false. Additionally, according to Entertainment Weekly, ABC Family released a statement saying,

All of the info on the site is false. No crew member was fired from PLL and we believe it is just a fan spreading incorrect information to rile up the fan base.

(The rest of the post will discuss the "spoilers" from the since-deleted Reddit user. Proceed with caution!)

Both ABC Family and King are telling us to not believe this so-called Pretty Little Liars expert, so, as fans, we really shouldn't take anything that this Reddit user says very seriously. I'm not sure someone would risk their career in television in order to provide spoilers for fans (confidentiality agreements are no joke in the TV world) but, even if the spoilers have zero merit, the theory behind them is pretty interesting.

According to this Reddit user, Charles is Wren, aka Melissa's fiancé and Spencer's one-time love interest. As the user wrote, Wren is the masked Charles, has been posing as both a doctor and an Oxford graduate. Oh, and the user said Wren's not even really English! The nerve of some people. The video below describes exactly how this particular Wren spoiler could still happen.

The Reddit user revealed other details, including that Melissa is Black Widow (she was working with Wren because she felt guilty about burying Bethany alive) and that Cece was the one who was friends with Bethany in Radley, but that she posed as Alison. Ultimately though, these details don't mean all that much — King and the network said that there's no truth behind these spoilers, and we don't have any confirmation that would say otherwise. It seems that King has a few words for the person who leaked these alleged spoilers:

That's not to say that Wren can't be A, though, despite the fact that a Reddit user is fabricating all of these spoilers. Wren is one of the few people who fit the age for Charles, and if Charles really is A, it makes plenty of sense for Wren to be high up on the list of suspects. We'll have to wait and watch to see if Wren is really A — but until then, don't believe everything you read on the Internet.