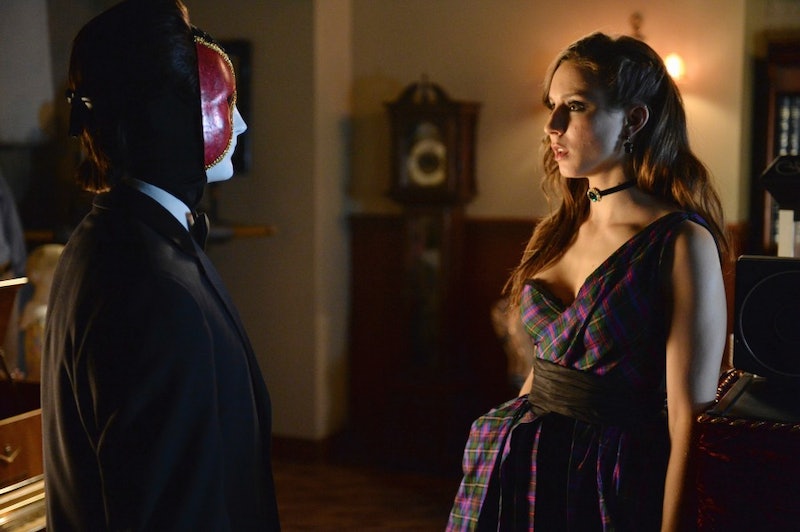 On a show like Pretty Little Liars, nothing is rarely ever as it seems, which is why it's important for fans to not take Charles' home movies at face value. When we were first introduced to the footage in the PLL Season 5 finale, viewers immediately began to theorize who the two boys were and how they were connected to each other. We know one of the boys is definitely Charles and assume that the other is more than likely Jason. However, that doesn't mean that they're necessarily brothers. In fact, there's a good chance that Charles is a distant relative to the DiLaurentis family rather than an immediate family member, which brings up a very important question: Who are Charles' parents on PLL ?

Because, let's be honest here, it's highly doubtful that he's the product of Jessica and Kenneth DiLaurentis. That just feels a little too clean cut for a show known for its high levels of complexity. Plus, it's not as if these two were exactly known for their monogamy. (Jason is the product of Jessica's affair with Peter Hastings, after all.) So it's not out of the question for one of them to have strayed yet again. Either that or Charles is the creation of another member of the DiLaurentis bloodline altogether. But who could these mystery parents be? Let's take a look at some of the most likely (and outlandish) candidates.

One major PLL theory out there involves the idea that Byron is Bethany Young's father. And while that may very well be the case, that doesn't mean that he couldn't also be Charles' father as well. We know very little about how well the parents of Rosewood know one another, but given the bad blood that exists between the Hastings and DiLaurentis families, it's safe to say they have a decent amount of skeletons in their own closets. (I guess it runs in the family.) And these two parental figures in particular have already proven to be complicit in extramarital affairs. So why couldn't it have been with each other? That would still technically make Charles a member of the DiLaurentis bloodline, while also giving him ties to Aria, who many believe to be a pivot part of the A game.

Jessica may not be the only perpetrator of infidelity in the DiLaurentis family. There's always a chance that Mr. D. dabbled in his own secret affair as well with Toby's mother, Marion. Up until now, her story arc has always felt a bit out of place, but if she turned out to be Charles' mother (thereby making Toby and Charles half-siblings), then that would prove to be a total game changer for pretty much everyone involved. In fact, if you wanted to complicate things even further, many fans have speculated that Jessica and Marion are actually sisters, which would really add fuel to this already complex genealogy fire.

Byron has mentioned that he had a brother named Scott, who has suffered from mental illness. Could this somehow factor into Charles' lineage as well as his connection to Radley? Given everything that A's done throughout the years, it wouldn't be a stretch to say that he too is in need of some psychiatric help. Perhaps it runs in the family and could explain why Jessica was a member of the board at Radley. Maybe she knew of Scott's condition and wanted to learn as much as possible in case their son Charles suffered the same fate. Otherwise, why have Byron bring up his brother at all? This show never does anything without a reason.

This one might be a little too out there, especially considering Ashley's recent tryst with Jason, however, I can't seem to shake off the feeling that Hanna's mom is somehow be involved in all of this. Out of all the parents, she's definitely been A's biggest blackmailing target. Could this be Charles' way of dealing with his mommy issues? At this point, we shouldn't rule any option out completely.

In the meantime, before we find out anything more, be sure to check out Bustle's Pretty Little Liars podcast, "Taking This One To The Grave."