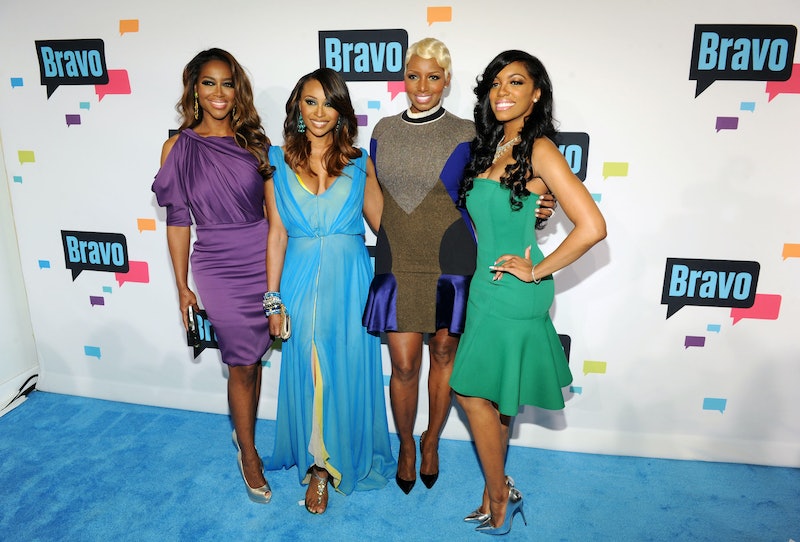 Anyone who has faithfully kept track of all the outlandish behavior that’s taken place during the past seven seasons of The Real Housewives of Atlanta already knows the word insane is pretty much synonymous with the show. Therefore, the task of choosing the craziest moments in Real Housewives Of Atlanta to occur since its premiere on Bravo in 2008 has me feeling more indecisive than a housewife trying to choose a wig to compliment her dinner outfit. Between all of the cast members — past and present — there’s a ton of material to work with, and I honestly don’t know where to begin.

Several of the show’s most dramatic moments are forever embedded into my memory, from Shereè Whiftield having a fashion show with no clothes (RIP She by Shereè) to Kim Zolciak and NeNe Leakes fighting on a tour bus to Mama Joyce throwing her shoe at Kandi Burruss' friend/assistant Carmon. Even all those instances are way too much drama for my brain to handle at the moment, so I can’t even imagine what’s in store when Season 8 of RHOA premieres.

Taking this mental stroll down RHOA memory lane might make you want to curl up with a glass of wine and marathon the series from start to finish, and that's perfectly OK. But, for now, settle for revisiting the show through 11 of RHOA’s most insane moments:

When Kim Revealed Her Singing Voice

She got off to a rocky start, but the insane part of this situation is the song actually turned into a hit.

Who knows why Shereè felt the need to "tug on" Kim's wig, but it's a classic RHOA showdown I won't soon forget.

Most awkward photo shoot EVER.

When Shereè Coined Her Infamous Catchphrase

The best thing to come out of Shereè's intense encounter with the world's angriest party planner was the five-word phrase, "Who gon' check me, boo?"

This Exchange Between Shereè And Marlo Hampton

You know the situation's crazy when Kandi loses her temper. This RHOA hotel room brawl was easily one of the most out-of-control moments in the history of the entire franchise.

When Kenya Introduced the World to Twirling

And she hasn't stopped twirling since.

Everybody knows Phaedra hires exotic dancers with, ahem... interesting specialties (who can forget Redickulous from Kandi's birthday?), but she completely outdid herself with the strippers she hired for Kandi's bachelorette party.

When Phaedra Parks Almost Lost it on Kenya Moore

Phaedra nearly threw her purse at Kenya's head, along with the rulebook on proper behavior.

When Porsha completely lost it on Kenya during the Season 6 reunion episode, it was clear that the craziness on RHOA had reached a fever pitch.

Who else is up for a rewatch right about now?

More like this
Everything To Know About 'RHONJ' Season 13
By Brad Witter
‘RHOBH’ Newcomer Sheree Zampino Is Still Close To Ex-Husband Will Smith
By Brad Witter
Everything To Know About A Potential 'Love On The Spectrum U.S.' Season 2
By Gretchen Smail
Kim Kardashian Remembers Her Last Words To Death Row Victim Brandon Bernard
By Jake Viswanath
Get Even More From Bustle — Sign Up For The Newsletter