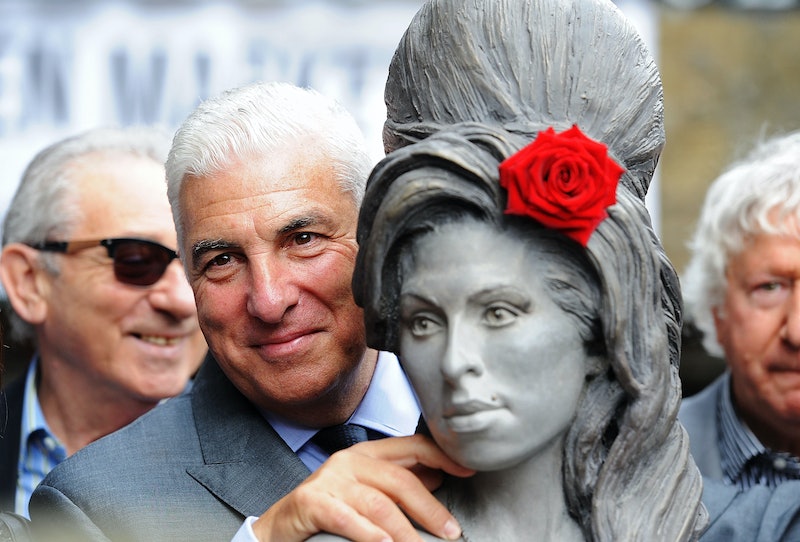 Among the typical big summer blockbusters like Jurassic World and Magic Mike XXL, another film is making waves just as loudly. Amy, the highly-anticipated documentary about late soul-singer Amy Winehouse is already receiving rave reviews, but one fan of the singer, who died from a drug overdose in 2011, is not satisfied with the narrative that director Asif Kapadia's documentary tells: her father. Mitch Winehouse believes Amy portrays he and his family unfairly. Mitch was originally supportive of the project, but later publicly announced that his family would be cutting ties with the "misleading" film because of one contentious point in particular: Amy shows an interview with Mitch Winehouse in which it seems he is saying that he didn't believe Amy needed treatment. But did Mitch Winehouse really not want Amy Winehouse to go to rehab? That's absolutely false — according to father, at least.

In an appearance on the British talk show Loose Women on Tuesday, Mitch clarified the comments he made that are including in the film, saying,

Mitch went on to say that he and Amy's boyfriend at the time of her death, Reg Traviss, are working together on their own film about his daughter. Mitch angrily lamented that though he did thousands of interviews, only one of them is included in the film, while all interviews with Reg are cut, and he never appears on screen speaking about his late girlfriend. Amy's father is furious with Kapadia for painting him as a cold, uncaring father that did not help his daughter seek treatment for her drug and alcohol addictions, telling the Associated Press, "They have selectively edited what I said to suggest that me and my family were against her getting any kind of treatment. We took her dozens of times to detox and rehab over the years."

Kapadia has asserted time and again that the film is really about the draining and ultimately fatal toll the effect of fame had upon Amy, leaving her feeling isolated though surrounded by fans. But that isolation, according to her father, was not altogether true. Though the media certainly racked Amy, Mitch says that he and his family, as well as his daughter's friends and boyfriend, were there to support and care for her. "Anybody who was involved with Amy in the last three years of her life are not in the film," her father said. "This nonsense about Amy being left alone for the last three years of her life is incredibly insulting. She had a lovely boyfriend, she had wonderful friends — they're not in the film."

Kapadia spoke with Variety and further explained his side of things, saying,

[Mitch] loved his daughter and she loved him. I would never attempt to pick on someone or attack them. This was intended to show that at some points a lot of people were making decisions that were not what was best for Amy. I wanted this to be honest to Amy. Not to harm people

It's difficult to know what the truth is. Though Kapadia does include interviews from myriad legends in the music business who knew or were affected by the legendary Amy herself, as a filmmaker he obviously still had artistic license, and according to Mitch Winehouse, he went too far with it. Time will tell if Mitch Winehouse ends up producing his own documentary and what changes his story will bring to audiences.