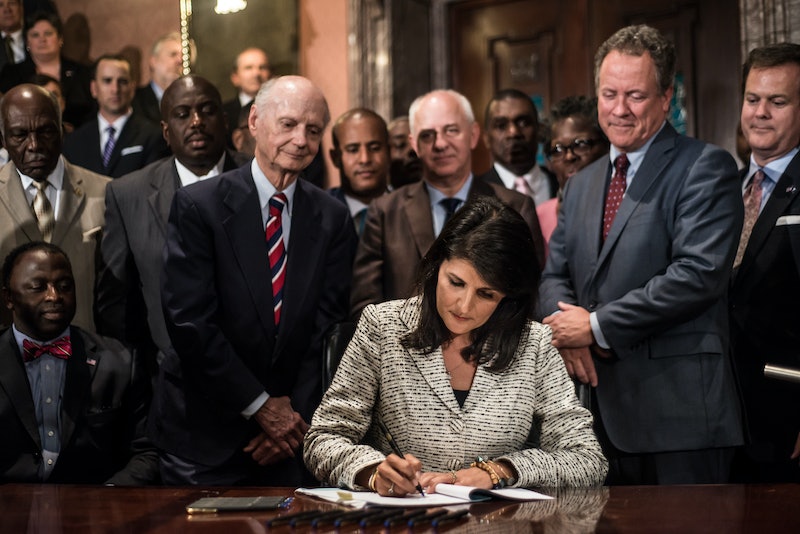 On Friday morning, the Confederate flag was taken down at the South Carolina Capitol in Columbia after the state legislature voted to have it removed. The first image of South Carolina's Confederate flag coming down is an incredible symbol for the state and the nation — a symbol that racism won't be tolerated. Since nine people were killed in a historically black church in Charleston June 17, people nationwide have called for the offensive flag to be taken down, but many southerners vehemently protested its removal, saying the flag serves only as a piece of cultural heritage.

After 13 hours of debate, the South Carolina House of Representatives voted to take down the flag Thursday, and Governor Nikki Haley signed the bill mandating its removal into law. The law requires that the flag to be sent to the Confederate Relic Room once taken down. A moving speech by Republican representative Jenny Horne during the debate criticized other members of her party for trying to stall the flag's removal with dozens of amendments. She cried as she spoke about one of the victims of the shooting, Sen. Clementa Pinckney, saying: "For the widow of Sen. Pinckney and his two young daughters, that would be adding insult to injury and I will not be a part of it!"

The most quietly celebratory moment? After the honor guards removed the flag, one guard shook his fists in the air in uncontrollable joy.

Removing the flag was a sign of respect to the victims and to the black community. Governor Haley said in a statement Thursday after the bill was passed by the House:

It is a new day in South Carolina, a day we can all be proud of, a day that truly brings us all together as we continue to heal as one people and one state.

This photo of the guard not only symbolizes healing for the state, it captures a historic day in South Carolina history. It's the first step toward eradicating racism and bettering race relations, as well as setting an example for the rest of the southern states that still fly the Confederate flag (particularly Mississippi, who's state flag includes the Confederate flag). Taking down the rebel flag obviously won't instantly make people more accepting, but the state recognizing the racist undertones of a flag that's flown at the capital for more than 50 years shows progress. Sadly it took nine people dying in their place of worship and the suspect having explicit ties to white supremacist groups to get here, but nevertheless, we made it — the Confederate flag no longer has a place at South Carolina's capitol.