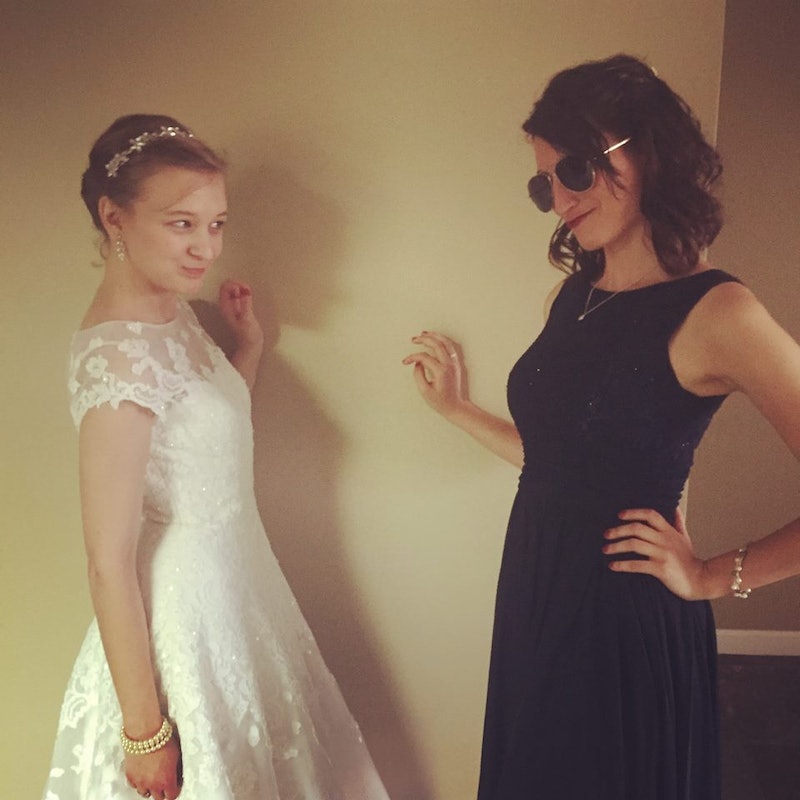 For all the revising I’ve been doing on my résumé as of late, I should just go ahead and write a new one. And right at the heading of the page, it should read, “Hilary Weaver, Professional Maid of Honor.” After serving as the all-reigning MOH at weddings in both summer 2014 and 2015, I’ve got plenty of experience: two successive years of planning bachelorette events, organizing bridal party activities and gifts, managing multiple schedules, holding the bride’s dress while she pees. It would all be on there. But nowhere on my hypothetical CV, now or preceding the Supreme Court ruling on gay marriage, would there read, “harbored jealousy over my straight friends’ ability to legally wed."

In fact, as a queer woman who just won the right to marry in any state I want, jealousy hasn't been one of my chief emotions lately. Between gaining the right to love and commit to whomever I want, wherever I want, while also preparing for my best friend's wedding, I've been nothing but giddy.

My best friend Savannah and her husband (still weird to say), Josh, decided on a July 4 wedding, which prompted some invited guests, including my pyromaniac parents, to politely decline, saying they had to “blow up stuff" in their backyard. But perhaps more significantly, Savannah and Josh had also unknowingly planned their wedding to follow the Supreme Court’s decision to legalize gay marriage. This coincidence, to my surprise, prompted several questions directed toward me, the out, queer Maid of Honor. The most poignant of these came as I was on my way to Michaels for yet another pre-wedding craft-supply run. I stopped to talk with my neighbor, who seemed concerned for my general mood as a queer MOH. "Does it ever bother you," she started, pointing to the bundles of tulle and ribbon in my backseat, "when your straight friends get married?"

I balked. Bother me? Well, first of all, nothing could bother me then. Summer had arrived, I was home enjoying the contents of my parents' refrigerator, and the Supreme Court had just told me that I am a human with fundamental rights equal to any other human. I was feeling pretty good. But even before the LGBTQ community finally received their long-awaited fundamental human rights, I had never considered any feelings of resentment toward my heterosexual friends.

In fact, the only shade I have ever thrown at my engaged friends had to do with micromanaging my all-important MOH duties. Forget the bride. When it comes to organizing everything from social gatherings to the bridal party's anxieties, the MOH is in charge. Never once did I think of myself as the "gay maid of honor" who felt slighted because her friends could legally walk down the aisle and she couldn't.

My nonexistent guilt mostly has to do with the fact that I have terrific friends who are allies in every way. They fight for the rights of all humans, and on more than one occasion have said that they would have been offended on my behalf had the Supreme Court ruled against gay marriage last month. "You can bring whomever you want to my wedding," Savannah repeatedly told me during the months leading up to her wedding date. I had wanted to respect her conservative upbringing, and she had only wanted me to feel like myself on her special day.

But beyond having all-star ally friends, I don't understand gay marriage to be mutually exclusive from heterosexual unions. Marriage is marriage. Wasn't that the whole point of the Supreme Court decision? And no matter if you agree with his much-quoted statement addressing sanctity of marriage, Justice Anthony Kennedy put it wisely in the Obergefell decision.

No union is more profound than marriage, for it embodies the highest ideals of love, fidelity, devotion, sacrifice, and family.

Marriage does not discriminate. There are no "us" and "them" teams sporting respective rainbow vs. solid-color shirts. The trending #LoveWins does not mean that gay love wins over straight love. All love wins. When the Supreme Court made its decision on June 26, it was not asking for legions of straight people to apologize for having the right to marriage for all these years. The decision signified moving forward with love and acceptance. The decision meant thanking our pioneers, such as longtime gay rights activists and partners Edith Windsor and Thea Spyer, for fighting so that those who followed them might have the rights they themselves weren't able to fully enjoy.

The LGBTQ community and our allies aren't necessarily looking to make up for lost time but rather to ensure that no one else ever has to feel that they are less-than. I want to have to explain to my future children that people like their mothers used to be discriminated against; I want archaic anti-marriage legislation to be a foreign concept to the little humans I raise. And I want them to understand that it's better now ... and will keep getting better.

As I wrote my maid of honor speech for Savannah, there wasn't one time that I thought, It's not fair that this is all so easy for her — that her love is not judged. I only thought, I love my friend for exactly who she is because that is how she loves me. In my speech, I used the characters Diana Barry and Anne Shirley from the L.M. Montgomery series Anne of Green Gables as metaphors for our friendship, because I think if Anne had been queer (whoa, can we all stop to think about how amazing that would have been?), her constant and true friend Diana would have been right alongside her, voting for her best pal's right to get married. And Anne would never have resented Diana for her recognized heterosexual rights. OK, sorry, I have to take a writing break to go pen the queer adaption of Anne of Green Gables.

Right, I'm back, and only to say this: When I stood with Savannah and Josh on their wedding day, I did feel something other than happiness for my friend and her partner. I felt unbelievably proud that Savannah will one day have the chance to stand with me as I marry my partner. And I know she can't wait for that day.