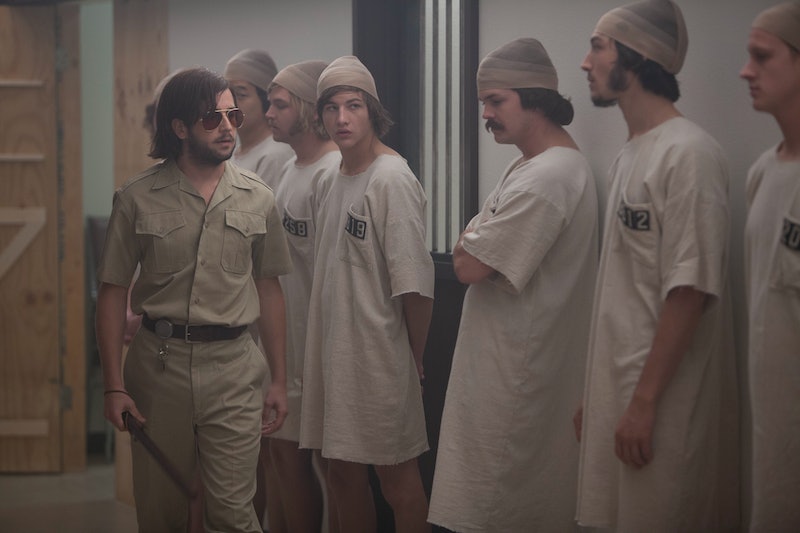 As its title suggests, The Stanford Prison Experiment, a new drama out July 17, is a movie based on a real-life prison experiment in 1971 where a group of students at Stanford University were chosen to take on the role of a prisoner or a prison guard. The experiment, done under the supervision of psychology professor Philip Zimbardo (played by Billy Crudup in the film), aimed to see the psychological effects of being placed in such an environment and study how people respond to authority (spoiler: not well). In the movie, viewers only see two hours of this fascinating study — but exactly how long was the Stanford Prison Experiment in real life?

You would think that due to its intensity, this experiment would be a one-day affair, but in reality, it lasted far longer than one or two days. This experiment ended up taking nearly a week, from August 14–20 in 1971. That is a long time to be in a fake prison, and especially so if you're playing one of the incarcerated. But it's not as lengthy as it could've been; the experiment was supposed to be two weeks total. According to Stanford.edu, it only ended early when a graduate student and his girlfriend told Zimbardo to stop the experiment because of horrible conditions were making her made her sick to her stomach.

And during its long length, the experiment went as far to make the prisoners feel like real prisoners and the guards feel like real prison guards. The prisoners were "arrested" in their real life homes and given uniforms and the amenities of real-life prisoners — if you can even consider them amenities. They were required to stay in the prison during all six days of the experiment. Take a look at the unsettling trailer for the movie version, below, to see how it pans out:

As for the guards, the volunteers were given the appropriate uniform and a wooden baton to establish their roles in the experiment. And like real prison guards, they were allowed to go home at the end of their shifts, leaving the experiment behind while their prisoner counterparts were living with their status 24/7.

According to BBCPrisonStudy.com, Zimbardo told the guards, "You can create in the prisoners feelings of boredom, a sense of fear to some degree, you can create a notion of arbitrariness that their life is totally controlled by us, by the system, you, me, and they'll have no privacy ... We're going to take away their individuality in various ways. In general what all this leads to is a sense of powerlessness. That is, in this situation we'll have all the power and they'll have none."

As seen in the trailer above, things quickly got out of hand. Guards started to abuse their power, prisoners started to revolt and everyone was just psychologically unstable — and personally, I would include Zimbardo in that category for letting it go on longer than it needed to.

I shudder to think of what would have happened if this experiment lasted the entire two weeks, as judging by what's known about the study and the recreation in this month's film, even a few days led to horrible — if fascinating — results.