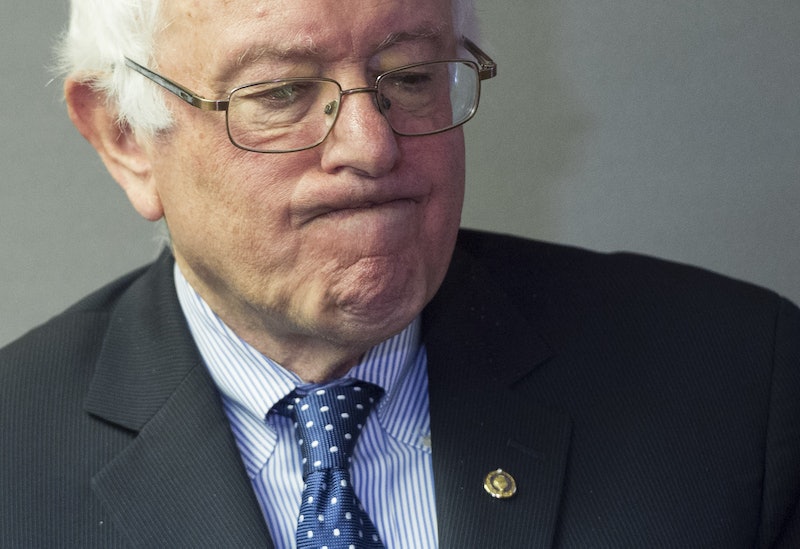 While the Jeb Bush campaign works to undo the likely damage done by the former Florida governor's remark that Americans "need to work longer hours," Democratic candidate Bernie Sanders had the perfect response to Bush. Bush made the comment during a forum at the Manchester Union-Leader newspaper on Wednesday, as he outlined his plans to try to generate 4 percent economic growth "as far as the eye can see." By working longer hours and being more productive, incomes would rise, Bush posited. In a later interview, Bush claimed he meant that Americans needed to be able to work full-time jobs, not part-time.

It's hardly a surprise that Vermont Sen. Sanders took issue with Bush's comment, since he's been railing against economic inequities for years. Sanders told Jon Stewart in 2011 that "Today we have a middle class which, in many respects, is collapsing. Median family income is declining."

On Thursday, Sanders responded to Bush by pointing out that things haven't improved much for the middle class. He told MSNBC that Bush's criticism of President Obama and remarks about working more didn't make sense since "[Bush's] brother left us an economy which hemorrhaged 800,000 jobs a month." And, he added, Americans work plenty hard already.

"The American people already work the longest hours of any people in any major country on Earth," Sanders said. "I'm not quite sure how much more Gov. Bush wants our people to be working."

Indeed, Bush's idea for stimulating economic growth seemed to contradict much of what we know about American workers, according to the Bureau of Labor Statistics. Sanders is right: Americans work more than most other industrialized countries, and take less vacation time. We also postpone retirement longer than our counterparts around the world (Jeb Bush actually has proposed raising the retirement age).

"Unfortunately, Gov. Bush does not seem to understand what is happening in our economy today," Sanders said in a statement. "The sad truth is that because the middle class has declined over the last 40 years, while almost all new income and wealth have gone to the people on top, Americans already work the longest hours of any people in the western industrialized world."

Sanders said the solution to the the middle class' struggle was not to work more hours, but "an economy that provides decent wages and income for the middle class, not demands that people work even longer hours than they currently do."