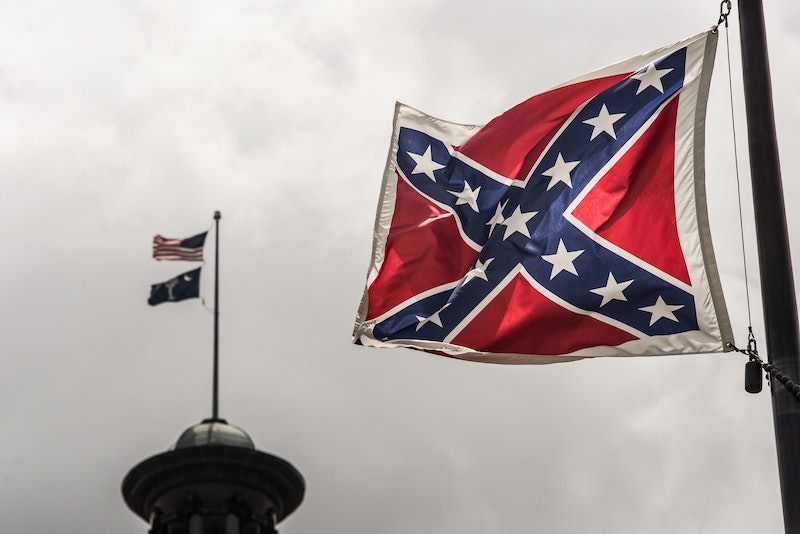 After weeks of debate, Governor Nikki Haley signed a bill on Thursday to remove the Confederate flag from the South Carolina statehouse. The law comes on the heels of the Emanuel AME massacre in Charleston, which saw nine individuals killed. Dylann Roof, who has been charged with nine counts of murder, cited racist beliefs as the motivation for his attack. Roof's social media profiles include countless photos of the 21-year-old posing with the Confederate battle flag, which re-sparked debates about the racist nature of the Civil War relic.

Although the bill has been signed into law, the flag doesn't officially come down until 10 a.m. on Friday, when, according to Haley, it will be taken down "with dignity, and we will make sure that it is put in its rightful place." So, what counts as the "rightful place" of the Confederate flag? According to the new law, the flag is a sign of South Carolina's long gone history, and should be treated as such. So, the flag will be placed in a museum. After being taken down, the flag will be transported less than a mile away and placed in the state's Confederate Relic Room at the Military Museum for display.

Although some advocates think the flag should be burned, thrown away, or otherwise destroyed, I would argue that the flag should be placed in a museum where it can be preserved and viewed for ages to come. Not because of heritage or its military history, as South Carolina suggests, but because of the unprecedented change in national opinion and dialogue that this specific flag invoked.

The Confederate flag has hung above the South Carolina capital building since it was placed there in 1961 in celebration of the 100th anniversary of the Civil War. It continued to fly over the building, however, as an official protest against the civil rights movement. In 2000, those who protested against the flag's presence succeeded in having it moved from on top of the building to a prominent place out front, next to a Civil War memorial. It hung there, undisturbed, until activist Bree Newsome scaled the 30-foot pole on June 27 in order to bring the flag down.

Newsome's protest, though daring, was short lived, as the flag was almost immediately restored. But nationwide horror and sadness regarding the deaths of those in the Charleston church sparked national boycotts of the flag, aided by industry giants Walmart and Amazon, who stopped selling the flag and flag-related paraphernalia. Once proposed, the bill to bring down the South Carolina flag breezed through the state senate, where Emanuel AME victim Rev. Clementa Pinckney had served as a senator.

The legislation bottled-necked in the House of Representatives on Wednesday, however, bogged down by 68 different proposed amendments. Eventually, aided by a passionate and tearful plea from Republican representative Jenny Horne, it passed. "I cannot believe that we do not have the heart in this body to do something meaningful, such as take a symbol of hate off these grounds," Horne said. The bill passed 94 to 20 with no amendments.

When the flag finally comes down in Friday, it will be a powerfully symbolic gesture, not just for African-Americans, but for the future of the South as well. For the first time, a Confederate flag is a symbol of triumph; and in the most fitting irony of all, the triumph is over systemic and institutionalized racism.