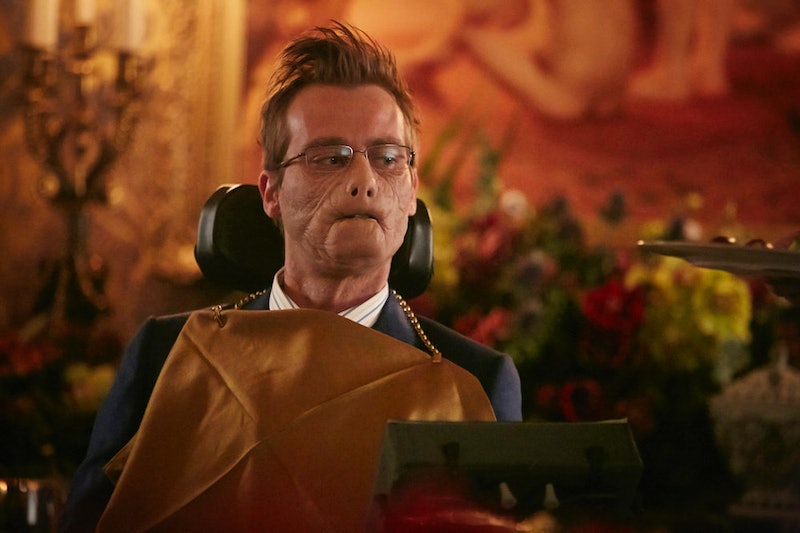 Hannibal has never been afraid to throw some surprising cliffhangers in our direction throughout the past three years, but Thursday night's Hannibal episode "Dolce" quite literally left us hanging. Well, not so much us, but rather Hannibal and Will, who have been kidnapped by Mason Verger and are currently hanging upside-down on hooks like pigs for the slaughter. Of course, we knew it was only a matter of time before Hannibal was caught. It was just a question of who was going to do the deed. And thanks to a never-ending stockpile of money, the honor went entirely to Mason, who is more than ready to exact his revenge. (Money may not buy you love, but it can apparently catch you a cannibal.) However, if you were wondering whether or not Mason intends to kill Hannibal and Will, I predict that while that is his overall goal, what he currently has in mind is a fate so much worse than death.

Let's not beat around the subject, shall we? Mason clearly intends to eat Hannibal in a very slow and torturous manner. And while you can't help but appreciate the irony, it's intriguing to think about how this will change the dynamic between our beloved characters, namely between Will and Hannibal, who are both in desperate need of saving. Will they work together to get of this situation alive or will they simply look out for their own best interest? It's not entirely clear what Mason intends to do with Will, but rest assured he's going to find a way to use his special connection to Hannibal against them.

But if I were you, I wouldn't write off this bromance just yet. Hannibal may have been caught, but that doesn't mean he's necessarily been defeated. I have no doubt that he could figure out a way to get both him and Will out of there with at least most of their body parts in tact. Plus, let's not forget that Chiyoh is still out there and has already proven to be more than capable of fending off Hannibal's attackers. Sure, Mason has the upper hand now, but by the end of next week Muskrat Farm could turn into quite the bloodbath, and I don't just mean for the captives.

More like this
'This Is Us' Just Gave New Meaning To Jack's Death & His Love Story With Rebecca
By Grace Wehniainen
All The Theories About Kathleen Peterson’s Death
By Morgan Leigh Davies
Will Shoresy Get A Season 2? What To Know
By Kadin Burnett
What Does Michael Peterson’s Family Think Of 'The Staircase'?
By Arya Roshanian
Get Even More From Bustle — Sign Up For The Newsletter