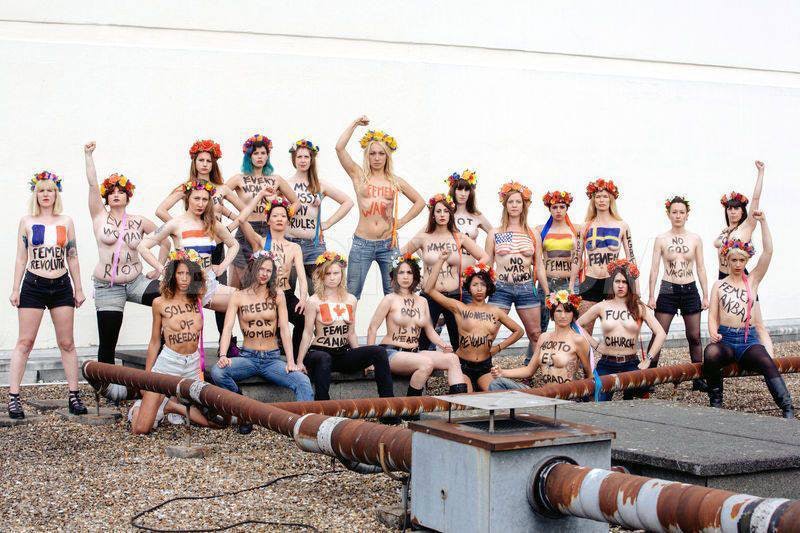 The unclothed body can be both sexual and radical, and never more so than when that body happens to be female. National Nude Day on July 14th is a good time to strip off your skivvies and celebrate, but it's also the perfect time to pay homage to the activists who use their naked bodies to raise awareness about feminist issues worldwide.

The history of topless activism is fraught with tactical criticism. Some argue that further objectifying the female form only reinscribes patriarchal oppression, while others say that using the female form in an empowered, non-sexual way is radical enough to break those chains. Then there's the argument that it's all nice eye candy, but that no real change occurs just because women take to the streets in their birthday suits.

Although polarizing arguments like these will continue for as long as there are issues worth fighting for, there's no "right" answer as to how female activists should use their unclothed figures to make a statement — or if they should do so at all. So in the spirit of giving props to those brave enough to walk the streets unclothed in the name of freedom, here are four feminist activist organizations you should be aware of:

What began as an eastern European movement has blossomed into a worldwide topless affair. The most controversial of partially nude activists, FEMEN's lofty goal is "complete victory over patriarchy" by using bare breasts as a weapon. The group has protested against everything from sex trafficking to the oppression of women in the middle east.

Free The Nipple is a fictional documentary film about topless activists that inspired a real life movement on social media. Both celebs and regular women alike took part in the campaign to question the way we freely screen violent images in the US, yet censor women's bodies as though they are more dangerous to view.

Accounts of unarmed black men killed by police have made headlines over the past few years, but little to nothing has been said in the mainstream press about the dozens of black women who have suffered the same fate. At a protest in San Francisco earlier this year, over 300 women gathered in a topless protest against the lack of coverage for this racist, sexist epidemic.

Founded by Sherry Glaser in 2005, Breasts Not Bombs in an anti-war and anti-war-on-women organization that uses topless activism to raise awareness about global atrocities. Their goals are a bit more diffuse than some of the abovementioned organizations, but their convictions are equally strong.