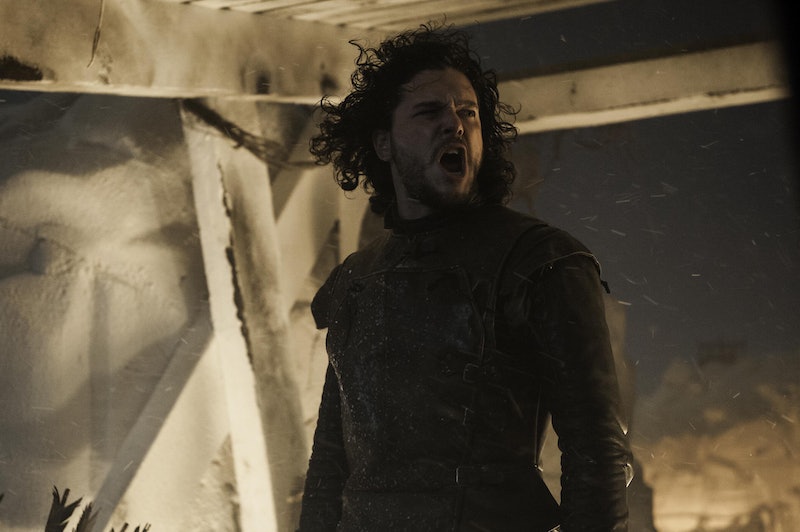 There are rumors flying around all over the place that Jon Snow is still alive after the horrific season 5 finale of Game of Thrones that left fans heartbroken over the loss of a Westeros hero. Since all these rumors are happening I decided to re-watch “The Watchers On The Wall” and search for some type of clues about Jon Snow coming back. Basically, I’m trying to analyze anything and everything while I grasp on to hope that Jon Snow will live another day. Clearly, I can’t handle the loss.

“The Watchers On The Wall” was a huge episode for Jon Snow and the Night’s Watch. Jon Snow was still dealing with the fact that he was in love with Ygritte, Ygritte was still dealing with the fact that he betrayed and abandoned her to return to the Watch, and there was a major war upon all of them. The entire episode was set at the wall and most of it was the fight, and, in case you forgot, Ygritte was murdered by none other than Olly: The little monster that finished off Jon Snow’s murder. I don’t know about you, but if someone doesn't kill that kid soon, I will be enraged.

I may be reaching with some of the clues that I found while watching the episode again, but I refuse to believe that they haven’t been planning this and hiding tiny details here and there for years now. That’s the George R.R. Martin way.

Have you ever noticed that in a time of need Ghost is always there? Also, Jon says “I don’t need you, I need him.” Maybe he just meant that Sam sucks at fighting and Ghost would tear people apart, but just maybe he Ghost is a major key to Jon Snow’s future. Basically there is a deep connection between the Starks and their dire wolves. It’s too important to forget.

As Ygritte is dying in his arms he promises her they would go back to the cave together. I know that Ygritte is dead for good, but his promise somehow seemed legit, and inside I just want them back together again.

Jon Snow is ALWAYS on top of burning the bodies after they die because obviously at this point we know they raise up from the dead. Now it’s too soon to say that they won’t burn Jon Snow’s body, but it did remind me that it’s something they have to do in order to keep someone from reanimating.

Oh, you mean the sword that can murder the White Walkers? At the end of the episode Jon Snow is heading out the gates toward Mance Rayder and he throws his sword at Sam mentioning that he promised the former Lord Commander that he would never lose the sword again. We now know that the sword has extremely important powers and could be a key to Jon Snow’s return.

What we don’t know is where the sword is currently, and who will have the brains to keep it and use it. We sure know Alliser Thorne isn’t smart enough. Maybe Sam will return and make sure it’s safe for Jon.

Everything is up in the air after the finale, but I wish Kit Harington and the producers would stop acting like Jon Snow is gone for good. We all know that can’t be the end of his plot line. Also, even though I have seen that episode multiple times, I am still bummed out about Ygritte. So thanks for that too, George.