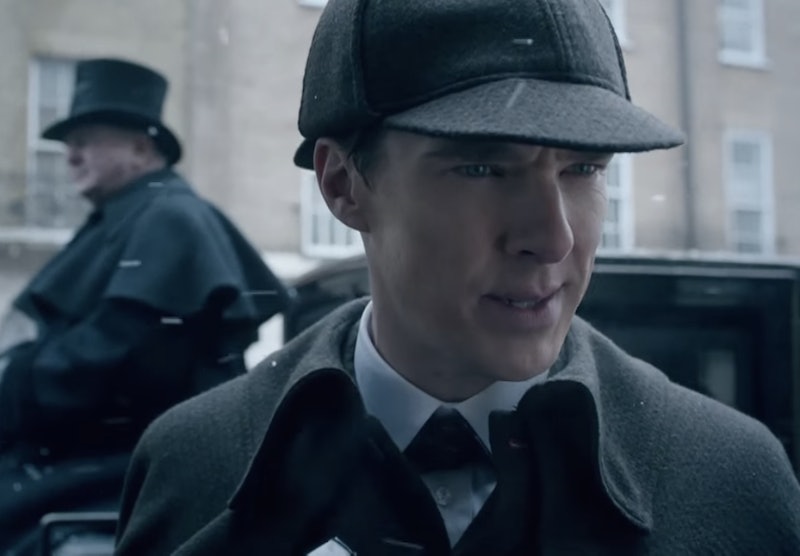 Fellow Sherlockians, hold on to your deerstalker hat, because Sherlock Holmes and John Watson are back. As San Diego Comic Con rages onward, fans of the BBC show were blessed with a one minute Sherlock Victorian Special clip that brings Holmes and Watson back to Baker Street in their original time period — unlike the modernized retelling of the classic stories that we've become accustomed to from Sherlock. The special will feature Holmes, in the deerstalker he infamously only wore once but nonetheless became associated with forever, and Watson, with a big, bushy mustache that he doesn't seem to have a Mary Morstan around to tell him to shave off. In fact, this clip explains why Watson has a mustache in the Sherlock Victorian Special, which is something I can't be the only one who was wondering.

In the clip, Mrs. Hudson meets Sherlock and John as they roll up on Baker Street in a carriage. As Sherlock complains about the latest case, Mrs. Hudson takes the opportunity to complain about the gender politics of the era, in the form of John using her character as a plot device in his stories about his adventures with Sherlock rather than giving her anything to do but "show people up the stairs and make you breakfast." Sherlock has complaints of his own about the stories, and even John joins in — to complain about their horrible illustrator, and how John was forced to grow that godawful mustache "just so people would recognize me."

Basically, it's a return to the Sherlock that we know and love, but in the original time period that the show had previously only used for inspiration and adaptation. The clothes and facial hair might be different, but the attitudes of the characters have remained the same, and Sherlock fans will no doubt be at the edge of their seat watching this over and over again until the actual special itself finally debuts. While we wait for that blessed day, let's reflect on the seven best moments from the clip, because there were a lot.

1. Sherlock In That Classic Outfit

It's official, you guys. Benedict Cumberbatch as Sherlock can rock any outfit, no matter how seemingly ridiculous. Look how suave and debonair he looks, when we all know Sherlock is a giant child playing dress-up.

It's actually quote a majestic mustache. And I also love how he got stuck holding the bags. (Or the arm? Or the head? You don't want to know what's in there...)

3. When Sherlock Complained About The "Dog One"

You mean, The Hound of the Baskervilles?

4. When Watson Tried To Explain The Writing Process

Not every female character can be a completely fleshed out person with arcs and motivations, Mrs. Hudson. What do you think this is, Harry Potter?

The feels. MY FEELS.

Without her, Baker Street would fall, and that's no less true in the Victorian Era as it is the modern day. The fact that we catch sight of her before we catch sight of Sherlock and John is actually the best part of this clip. As is the fact that she complains about John's treatment of her as a very important female character in his stories.

7. The Boys Being Back

Is the special here yet?