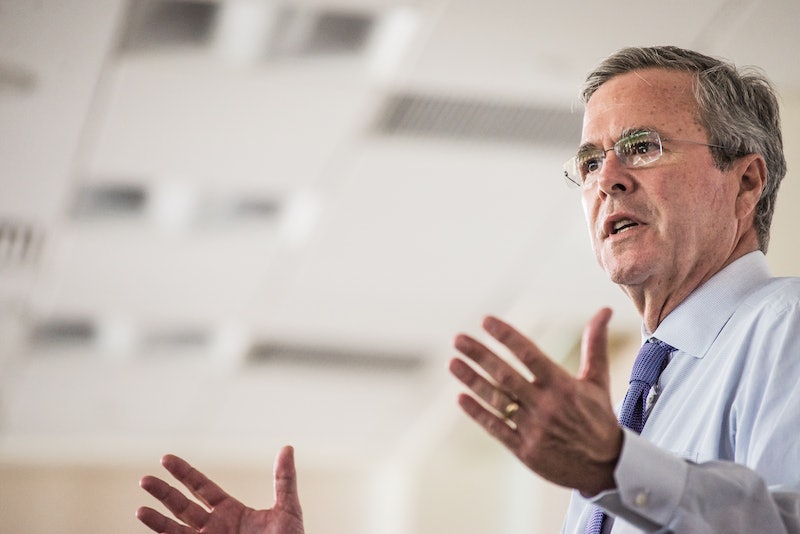 Most people with a Twitter account and a brain would probably agree that trolling, teasing, and snark are all but impossible to avoid. And now that politicians have fully embraced Twitter as a means of communicating with their constituents, they've shown they're not above indulging in their snippier sides on social media. Just on Wednesday, Hillary Clinton and Jeb Bush exchanged Twitter jabs discussing their views on longer work hours for Americans. Top politicians have to be quick on their feet and always appearing intelligent, so engaging in a Twitter debate with any one of them is not something I'd ever want to do, but there's so much at stake for the candidates running for president that it is apparently difficult for them to avoid getting personal with one another. And trust me, some of these politicians Twitter zingers are pretty hilarious.

Some politicians have social media managers working their Twitter accounts on their behalf (a bummer, as far as I'm concerned), but for those who do let it rip even partially on their own, it seems like it's only a matter of time before any of them try to stick it to an opponent. Don't believe me?

According to CNN, Jeb Bush stated in an interview that "people need to work longer hours."In response to Bush's claim, Hillary took to Twitter to take a jab at Jeb, and Bush didn't hesitate to fire right back.

You have to give the man points for creativity. But those points should probably be taken away for referencing a movie made in the '80s to point out that someone is stuck in the past.

I hope I'm not the only one who laughed out loud at this...

Is it me, or does this not make any sense?

OK, this one reads as a tad sexist to me.

Well, well, well! Pataki attempts to call Trump out in a debate. Why do I get the sense this would happen in a boxing ring and air on pay-per-view?

Apparently, nobody can help themselves from picking fights with others over social media. If the candidates are already this edgy, it's going to be a long haul to 2016. Now, who else wants to join me in baiting Trump into a Twitter fight? Anyone?