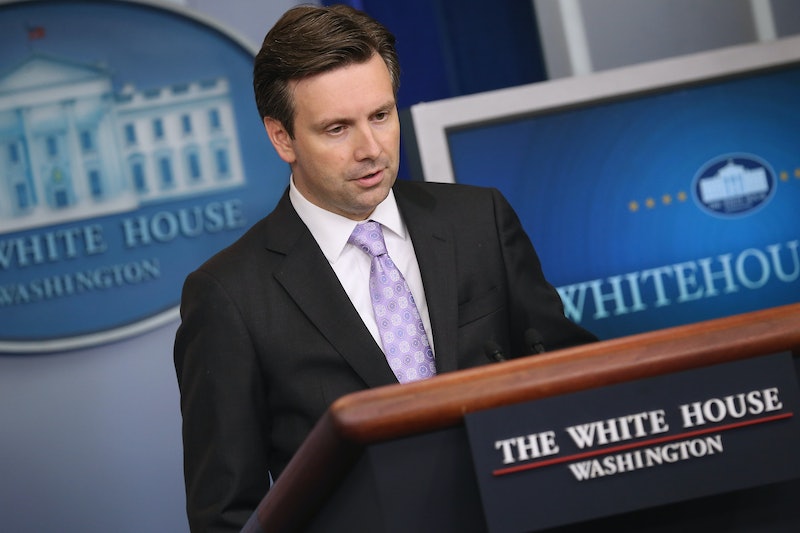 On Friday, the Confederate flag flying in South Carolina's statehouse grounds was finally lowered by a troupe of honor guards. The news that the Confederate flag will no longer serve as a symbol of the South Carolina state government gave many advocates the chance to cheer and chant their approval for their representatives and the direction in which the country is headed. However, some government officials took the opportunity to sneak in a few punches toward the opposing party. In a briefing that began with the Confederate flag, Press Secretary Joshua Earnest bashed Donald Trump and Ted Cruz.

Reporters gathered for a briefing on Thursday from Earnest. He began by noting that the South Carolina legislature voted to take down the Confederate flag, which was a symbol of racial tension for more than 150 years, and expressed his support of this move. However, he did not hesitate to criticize Republicans and said, according to the White House:

Republicans in Congress, however, seem to have values and priorities that lie elsewhere. Right now, the Interior appropriations bill in the House is jammed up because a sizable number of House Republicans are eager to protect the status of the Confederate flag on National Park Service grounds.

These are same congressional Republicans who have declined to criticize the race-baiting rhetoric of a leading Republican presidential candidate.

This can only mean Trump. The Republican businessman and TV star opened his presidential campaign by stating that some Mexicans wanted to come to the United States to rape and traffic drugs. The statement sparked scathing critique from seemingly every candidate, lawmaker, and Twitter user.

But Earnest wasn't finished. He also had to throw a shot at Cruz, who openly supported Trump. The press secretary added:

That’s to say nothing of the Senate Republican who saluted that candidate.

Although everyone with a brain has pointed out how ridiculous Trump's comments were, few have called out the more serious — and sane — people who support Trump's racially charged comments and want him to be the president of the United States. Like, uh, that "Senate Republican." According to Bloomberg, Cruz said:

Along with his criticism of the candidates, Earnest said before taking questions:

So when you hear me say that congressional Republicans have an agenda that is out of step with the vast majority of Americans, (Cruz's) record, at least in part, is what I’m referring to.