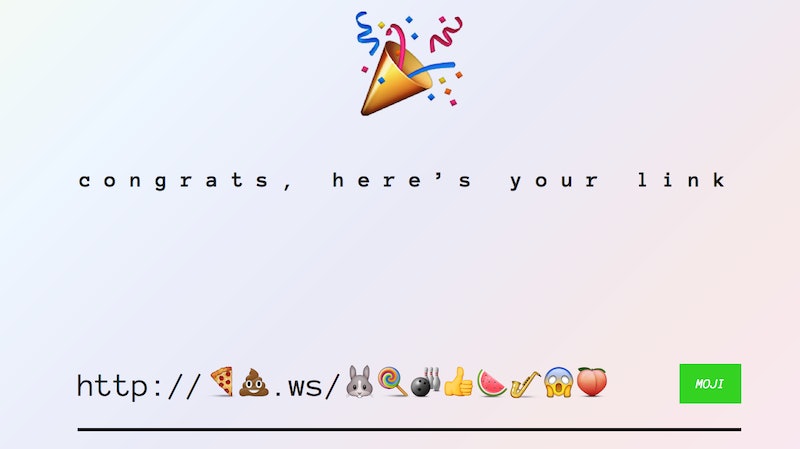 Between all your most frequently used emoji constantly popping up on your phone and myriad tips floating around about how to use certain obscure ones, you've probably got more than enough emoji action in your life. In case you want more, though, meet Linkmoji, the website that turns any link into emojis for your viewing pleasure. The website basically works as a link shortener like bit.ly or Tiny URL, and can be beneficial if you're, say, trying to save character space in your tweets — each URL begins with the pizza and poo emoji with ".ws" at the end, which definitely cuts down on character usage. I don't really know why pizza plus poo equals Linkmoji, but, well... that's OK.

Right now, the links are randomly generated by the Linkmoji algorithm; however, the team seems to be working on adding custom emoji according to Product Hunt. This means that eventually, we might be able to decide for ourselves exactly which emoji characterize a particular website — which might eventually set it apart from the few other emoji converters that exist. Because hilariously, it's not the only one: iEmoji is basically Google Translate for emoji; Emojimo converts words you type into emoji in real time; and there are even Unicode converters that show you each emoji's code.

I decided to see what some popular websites looked like when fed through Linkmoji, so check out the emojified versions of these six links:

I mean, obviously the peach emoji is involved.

Curiously, Linkmoji's emoji link for itself after the initial input includes neither a pizza or poo emoji. You'd think there would be some overlap, no?

I mean, literally any emoji goes for Tumblr.

As I previously mentioned, right now the website generates totally random links each time; it'll be much cooler when it can actually customize content. Twitter, for example, might just be "www dot bird emoji plus pen emoji dot ws." Pretty soon we won't even needs words at all!