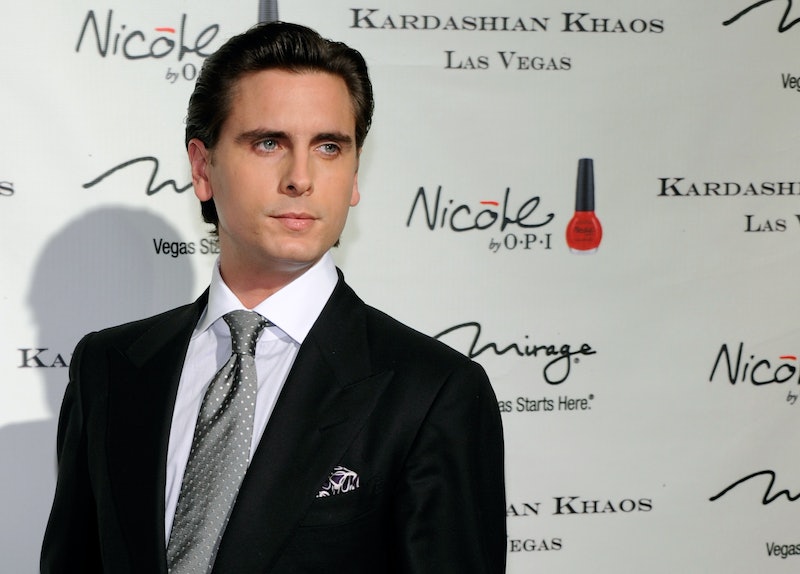 It's surely been a hard week for reality TV couple Kourtney Kardashian and Scott Disick, who recently ended their tumultuous relationship after nine years together. Obviously, us outsiders can only judge as far as we can see, but it does seem like Scott is having a rougher go of the breakup than Kourtney, sincerely bumming everyone out on Thursday when he posted an Instagram for his daughter Penelope's third birthday. As you were scrolling down your feed, you might have seen the collage Dad Disick posted of his daughter — six pictures stitched together of the little lady in some cute outfits — and then you were probably struck with an arrow through the heart when you read the caption: "1 of the only things I'm proud of about myself. happybdayp." Well damn, dude!

It made me feel pretty bad for Scott, because even though it seems like he really screwed up and Kourtney was right to leave him after he was caught red-handed canoodling with his ex-girlfriend, my heart still goes out to the guy, because there were times when he seemed like a pretty great dad.

Scott's been a Kardashian pretty much since the Kardashians became a thing, and watching him grow up with Kourtney and raise three kids — Mason, Penelope, and Reign — has been a long and strange journey. One of my favorite parts of watching KUWTK has been seeing whatever cute antics Scott and his little crew are up to, and he's proven that he's a pretty great dad.

Here are eight reasons why:

1. His kids are the most important thing

Scott told People in February that he thinks family is more important than money, and that his kids are the most important part of his life by far: "We've been fortunate enough to have three amazing kids. They don't really make our lives any harder, they make it easier, because you kind of realize what life's about... and I thank God for that." Some might be surprised to hear that from Lord Disick, who enjoys the finer things in life and doesn't always sound so down-to-earth.

If you've seen Scott interact with his kids on Keeping Up With the Kardashians, you know that the kids love to snuggle with Scott and he loves it, too.

3. He taught Mason how to chill

I imagine life can get stressful even for a toddler when you're growing up in the Kardashian family, and Scott Disick made sure that his son Mason stayed cool and learned how to kick back, relax, and get his tan on.

What's better than a high-five from your cool dad when you're a kid? Or any age, honestly?

5. He shares new experiences with them

Like the time he and Penelope witnessed the awesome power of nature, TOGETHER. And look at Penelope's beanie. It's so small.

Wow, is not this the saddest.gif you've ever seen, in retrospect?

Mason's style is PERFECTLY mini-Scott, and Penelope always looks chill, too. It's important to teach your kids how to be stylin', especially if they are Kardashians.

8. He makes sure to tell his kids he loves them

It's important for kids to hear that they are loved and appreciated. Scott always makes sure to say it loud and say it proud to his children.

Maybe I'm just a sap or a sucker, but this looks like the face of a guy who loves his kids. Hang in there, Scott.